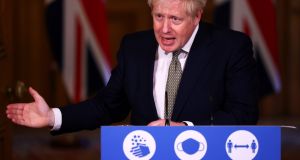 Britain’s prime minister Boris Johnson: “I share people’s frustrations and I understand totally why we do need to see faster turnaround times and we need to improve it,” the British prime minister told a press conference in Downing Street. Photograph: Henry Nicholls/Getty Images

Boris Johnson has admitted that Britain’s Covid-19 test-and-trace system must be improved after new figures showed that only 15 per cent of tests were coming back within 24 hours and less than 60 per cent of close contacts were being reached.

“I share people’s frustrations and I understand totally why we do need to see faster turnaround times and we need to improve it,” the British prime minister told a press conference in Downing Street.

“We need to make sure that people who do get a positive test self-isolate – that’s absolutely crucial if this thing is going to work in the way that it can.”

The government tightened restrictions in three more parts of England on Thursday after moving Greater Manchester and South Yorkshire into Tier 3, the highest level of local lockdown. Chief scientific adviser Patrick Vallance said England could be seeing up to 90,000 new coronavirus cases a day, far higher than the number found through testing.

Chancellor of the exchequer Rishi Sunak on Thursday announced a new package of measures aimed at businesses and workers in areas under Tier 2, the intermediate level of restrictions. Businesses in London and other places under Tier 2 have complained that the restrictions mean bars and restaurants can remain open but social distancing rules forbid anyone meeting a member of another household in them.

Businesses ordered to close under Tier 3 restrictions have received a subsidy to pay two-thirds of the salaries of furloughed workers but those in Tier 2 have not. The new scheme will subsidise the wages of employees who work at least one day out of five and reduces the portion of pay for unworked hours employers must pay.

The changes are backdated to August so cities in the north of England and the midlands which have been under intermediate restrictions for months can benefit from them.

“People need to know this is not for ever. These are temporary restrictions to help control the spread of the virus. There are difficult days and weeks ahead but we will get through this together. People are not on their own. We have an economic plan that will protect the jobs and livelihoods of the British people wherever they live and whatever their situation,” Mr Sunak said.

Businesses welcomed the move but the government continued to face criticism on Thursday for voting down a parliamentary motion endorsing footballer Marcus Rashford’s call for free school meals to be provided to poor children during school holidays that start on Friday. Junior minister Caroline Ansell quit her government post after joining four other Conservative MPs in voting for the Labour motion.

“In these unprecedented times I am very concerned to be doing all we can to help lower income families and their children who are really struggling due to the impact of the virus,” she said.