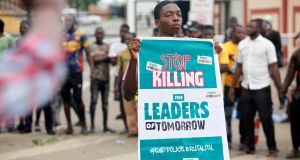 A boy holds a banner during a protest against Nigerian rogue police, otherwise know as the Special Anti-Robbery Squad (Sars), in Lagos, Nigeria. Photograph: Akintunde Akinleye/EPA

The Nigerian army has been accused of shooting dead unarmed citizens who were protesting against police brutality, as demonstrations continue across the country.

The incident occurred on Tuesday evening, at a toll gate in the Lekki neighbourhood in Lagos, Nigeria’s biggest city, where protesters had gathered. In videos posted online they can be heard singing the national anthem in the dark as gunshots begin.

Human rights organisation Amnesty International said it had received “credible evidence” of multiple deaths at the site. Photographs from the aftermath show windows in the toll gate smashed and buildings on fire in the area.

Akinbosola Ogunsanya, an eyewitness, told CNN that lights were turned off before the shooting began. “Members of the Nigerian army pulled up on us and they started firing,” he said, adding that ambulances were blocked from accessing the scene.

“They were shooting, they were firing straight, directly at us, and a lot of people got hit. I just survived, barely.”

“Nigerian authorities turned a peaceful protest against police brutality into a shooting spree, showing the ugly depths they are willing to go to suppress the voices of citizens,” said Anietie Ewang, Nigeria researcher at Human Rights Watch, in a statement to The Irish Times.

“The authorities should immediately withdraw the military from the streets, and identify and prosecute officers responsible for or complicit in any excessive use of force against peaceful protesters,” she said.

European Union foreign affairs chief Josep Borrell called the news of the shootings “alarming”, and urged that those responsible to be brought to justice.

US presidential candidate Joe Biden said his “heart goes out to all those who have lost a loved one in the violence”.

Lagos state governor Babajide Sanwo-Olu called what happened “some of the darkest gradients of our history as a state and as a people” and said he had ordered an investigation.

“There are no excuses for the unfortunate incident that took place last night, and as the governor, I apologise for every action and inaction,” he wrote on Twitter.

However, Mr Sanwo-Olu said the protests had been taken over by “arsonists, hoodlums and anarchists”, who were using them as an excuse to “unleash mayhem on the state”.

A 24-hour curfew has been implemented in the city, which has a population of roughly 14 million.

Protests began in early October, after officers from a branch of the Nigerian police force, the Special Anti-Robbery Squad (Sars), were filmed dragging two limp bodies from a Lagos hotel into the streets, and then seemingly shooting one of them. The unit was well-known for extorting, kidnapping and even murdering innocent Nigerians.

Between 2017 and 2020, Amnesty International documented 82 cases of torture, ill treatment and extra-judicial execution by Sars.

President Muhammadu Buhari said the unit would be disbanded on October 11th, but victims expressed concerned that Sars officers would be redeployed. There had already been widespread reports of police violence by other units against demonstrators.