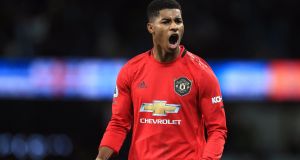 Boris Johnson, who cut a swathe through Labour strongholds last December by promising to “level up” the neglected English provinces, has this week seen his government demonised in the North of England as mean-spirited, patronising and out of touch.

Rashford’s personal experience of growing up in poverty and depending on free school meals gives him some authority when he calls for the meals to be provided during school holidays too while the coronavirus pandemic lasts. But this did not stop a number of Conservative MPs dismissing him as a millionaire celebrity, with Mansfield’s Ben Bradley describing free school meals as a freebie.

“We’re doing a lot to help the most vulnerable children, but ever-extending freebies are a sticking plaster not a solution,” he tweeted.

Rashford replied that the government already paid a high price for child poverty in underachievement and lost potential, adding that the extension of free school meals was an emergency measure rather than a long-term solution.

“Since March, 32% of families have suffered a drop in income. Nearly 1 million have fallen off the payroll. This is not dependency, this is a cry for help. There are no jobs!! 250% increase in food poverty and rising. Nobody said this was simple,” he said.

After prime minister’s questions on Wednesday, Johnson went to the tea room to schmooze with Conservative backbenchers. Prime ministerial visits to the tea room are usually a sign of trouble, all the more so for an unclubbable figure such as Johnson.

There is more bad news to come as further regions of England are expected to be moved into severe local lockdowns at the same time as chancellor Rishi Sunak’s furlough scheme ends, with an expected sharp rise in unemployment. The government defeated Labour’s motion backing Rashford’s campaign but the victory could prove to be a costly one.

“Boris Johnson and the Conservatives have badly let down more than one million children and their families,” Labour’s shadow education secretary Kate Green said immediately after the vote.

“No child should go hungry over the holidays, but the government is blocking the action needed to prevent this. We pay tribute to Marcus Rashford and others for shining a spotlight on this incredibly important issue. This campaign is not over and the government must reconsider.”