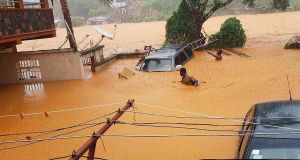 A mudslide killed more than 200 people on the outskirts of Sierra Leone’s capital Freetown on Monday, sweeping away homes and leaving residents desperate for news of missing family members.

The Red Cross said at least 205 bodies had been taken to the central morgue in Freetown. Police and military personnel were at the scene in the mountain town of Regent searching for people trapped in the debris.

Many people living at the foot of Mount Sugar Loaf were asleep when the mountainside collapsed, burying dozens of houses, including two-storey buildings, witnesses said. Standing in the rain, residents sobbed as they mourned family members and waited for news of those missing.

Adama Kamara wept as she described a failed attempt to rescue her 7-week-old child. “We were inside when we heard the mudslide approaching. I attempted to grab my baby but the mud was too fast. She was covered alive,” said Kamara, who escaped with bruises. She said she was not sure what had happened to her husband.

A man said he had left early in the morning to buy bread. When he returned, his wife, children, siblings and in-laws were all dead.

The death toll is expected to rise as more bodies are recovered, Red Cross spokesman Abu Bakarr Tarawallie said. Vice-president Victor Foh told Reuters at the scene: “It is likely that hundreds are lying dead underneath the rubble.” He said a number of illegal buildings had been erected in the area. “The disaster is so serious that I myself feel broken,” he said. “We’re trying to cordon the area. Evacuate the people.”

An excavator ploughed away at the mountainside and ambulances rushed back and forth to the city centre with bodies and wounded, but rescue efforts were hampered by bad roads and the weather, a witness said.

Community chief Fatmata Tarawallie said she had started calling for help at 4am but that it did not come soon enough. “Now our community has sunk,” she said. Mudslides and floods are fairly common during the rainy season in West Africa, where deforestation and poor town planning has put residents at risk.