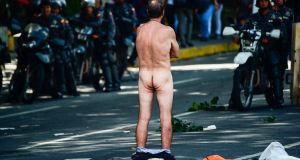 The constitutional stand-off in Venezuela has intensified. The country is now home to two rival legislatures vying with each other for power from the same building in Caracas.

On Wednesday the opposition-controlled national assembly met in the legislative palace to defy efforts by a controversial constitutional assembly backed by embattled president Nicolás Maduro to strip it of its authority.

They voted to repudiate a decree passed by the rival body on Tuesday, which declared itself the country’s supreme power. Both votes took place in the legislative palace, now the focus of the country’s political stand-off, which has left at least 120 people dead in the past four months. A UN report this week blamed the Maduro administration for the majority of the deaths.

Tuesday’s decree was approved unanimously by the new constitutional body – which contains only supporters of the “Bolivarian Revolution” launched by deceased president Hugo Chávez – after the opposition boycotted elections for it, saying they had been rigged to produce a pro-government majority.

Delcy Rodríguez, the president of the new body, said the rival national assembly is now prohibited from taking any measures that might interfere with its work. Her warning follows statements by the opposition that any international accords signed by the new constitutional assembly will not be recognised if it comes to power.

These have been interpreted as a warning to foreign creditors not to extend further loans to the cash-strapped Chavista regime, which is battling the fallout from an economic collapse that has seen the economy shrink by more than a third since Mr Maduro came to power in 2013.

The right to try

The constitutional assembly is also moving ahead to set up what it calls a “truth commission”, which Mr Maduro has said will have the right “to try anyone”. He has already called for the new assembly to strip members of the rival legislature of their parliamentary immunity. During Wednesday’s session the body was expected to pass its first law, which would govern its internal procedures.

This week also saw the Chavista-dominated electoral authority ban the main opposition alliance from presenting candidates for gubernatorial elections due in December in seven of Venezuela’s 23 states. The ban affecting the United Democratic Table, or MUD, alliance includes two of the country’s three most populous states.

The electoral authority said its ruling was due to legal cases brought against the alliance in the states in question. The opposition claims it is the victim of a witch hunt by the Chavista-dominated court system.

At a meeting of 17 American states in Lima on Tuesday, foreign ministers openly referred to the Maduro regime in Caracas as a “dictatorship”.

Twelve of those present – including Argentina, Brazil, Mexico and Canada – issued a declaration saying they would not recognise the new constitutional assembly.

At a rival meeting of the Bolivarian Alliance for the Peoples of Our America (Alba) in Caracas, President Maduro received backing from Cuba, Ecuador, Bolivia, Surinam, Nicaragua, El Salvador, Grenada, Dominica, and Saint Vincent and the Grenadines.