Australian deputy prime minister Barnaby Joyce may not be eligible for parliament after being told he 'may be' a dual citizen of Australia and New Zealand. 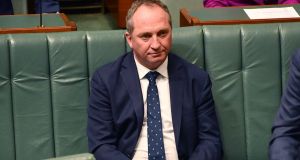 Australia’s deputy prime minister, Barnaby Joyce, in parliament on Monday, when he disclosed he may be a citizen of New Zealand. Photograph: Mick Tsikas/ EPA

Australia’s deputy prime minister, Barnaby Joyce, may be ineligible to sit in the country’s parliament after it emerged he is a New Zealand citizen.

Mr Joyce is potentially the fifth politician in recent weeks to fall foul of constitutional rules barring dual citizens from Australia’s parliament. The laws, designed to ensure loyalty to Australia from elected representatives, have already caught out four senators since mid-July, forcing two to quit parliament.

Mr Joyce’s case is by far the most significant for the Australian prime minister, Malcolm Turnbull, and his rightwing Coalition government. Mr Turnbull leads the Liberal Party and Mr Joyce leads its junior partner, the National Party.

If Mr Joyce is forced out of parliament, the Turnbull government would lose its one-seat majority in the House of Representatives. Mr Joyce is the first lower house member and the most senior minister to face questions about his eligibility.

The matter will now go before the high court, the highest court in Australia’s judicial system, to determine whether Mr Joyce’s New Zealand citizenship made him ineligible for office.

Section 44(i) of the Australian constitution says anyone who holds the citizenship of another country is barred from holding public office – unless they can show they have taken “reasonable steps” to renounce their second citizenship.

Mr Joyce said he had been made a New Zealand citizen without his knowledge. “Neither I or my parents had any reason to believe that I may be a citizen of any other country,” Joyce said.

“The concept of New Zealand-Australian citizenship was not created until 1948. Neither my parents nor I had ever applied to register me as a New Zealand citizen.”

Mr Joyce has refused to step aside from his duties as deputy prime minister pending the high court hearing. He will also continue to cast his crucial vote in the lower house.

That is a markedly different approach to that of his colleague, the energy minister Matt Canavan, who stood aside from his cabinet duties after discovering he held dual Australian-Italian citizenship last month. Mr Canavan, a senator, also said he would not cast his vote in the upper house until his own case was dealt with by the high court.

“Based on advice from the solicitor general, the government is the very confident the court will not find that the member for New England is to be disqualified from the parliament. Very confident,” Mr Turnbull told the Australian parliament on Monday.

Last month two senators from the Australian Greens, Scott Ludlam and Larissa Waters, quit the Senate after it emerged they were citizens of New Zealand and Canada respectively. Their plight was initially enjoyed by rightwing critics. Mr Ludlam and Ms Waters said they did not know they were dual citizens but resigned all the same.

A senator with the far-right One Nation party, Malcolm Roberts, was referred to the high court for a possible dual Australian-British citizenship but remains in parliament.

Mr Joyce was born in Tamworth, a regional town in New South Wales, and speaks with a distinctly Australian drawl. His National Party has traditionally represented the nation’s graziers, farmers and rural voters.

He attracted global headlines when, as agriculture minister, he told Johnny Depp and Amber Heard that their dogs Pistol and Boo should “bugger off” or be put down after they were brought into Australia illegally.

Oddly, the revelation about Mr Joyce’s citizenship was instigated by the New Zealand Labour Party MP Chris Hipkins, who submitted two written questions in parliament to the internal affairs minister, Peter Dunne, who was given until the August 17th to respond.

He also asked: “Would a child born in Australia to a New Zealand father automatically have New Zealand citizenship?”