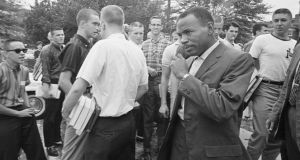 African American student James Meredith walks across the University of Mississippi campus after class amid the stares and jeers of fellow students back in 1962. Photograph: Getty Images

In the fifth part of her series “Coast to Coast: Travels in Trump’s America”, Washington Correspondent Suzanne Lynch travels to Oxford and Cleveland.

In 1962, John F Kennedy faced one of the biggest crises of his young presidency. A problem was brewing, not in Cuba or the Soviet Union, but in the heart of Mississippi.

A black student, James Meredith, had applied to attend the University of Mississippi in the town of Oxford, but was barred by the college authorities. The state governor, Ross Barnett, supported the university. “I’m a Mississippi segregationist and I am proud of it,” he declared.

Following background negotiations with the president and attorney general Robert Kennedy, on the night of September 30th, Meredith was escorted to his dorm by US marshalls. But a crowd soon gathered and violence erupted. Robert Kennedy ordered federal troops to enter the university.

Over the next few days, two people were killed and hundreds injured as cars were set alight and rioting ensued. Images of the violence were beamed across the world. But the fallout from the bloody events of September 1962 was that the first black student was enrolled in the university. Three years later, James Meredith graduated with a degree in political science. He was still under 24-hour police guard.

Today, the old university town of Oxford, Mississippi, is the picture of southern refinement. One of the prettiest towns in the Deep South, its main square has an old-world feel. Ole Miss, as the University of Mississippi is affectionately known, has tried to move on from its history of segregation.

Approximately 15 per cent of the student population is now African American – still a low figure to many. Today the university’s impressive campus on the edge of town looms large over Oxford, drawing researchers from across the world and lending the town a cosmopolitan edge.

Like much of Mississippi, Oxford has strong literary connections. Tourists can visit the house of William Faulkner, the Nobel-prize winning author, who lived and wrote in his home nearby. His Mississippi upbringing infuses every page of his prose. As he put it: “I discovered that my own little postage stamp of native soil was worth writing about.”

I stop for lunch in one of the many cafes and brunch spots lining the central square. My waiter tells me that Hollywood actor and Mississippi resident Morgan Freeman is filming just north of the town – though no one has spotted him yet. After a leisurely lunch and a stroll around the bookshops, I reluctantly leave the slow-paced southern vibe and drive westwards through the state of Mississippi.

Less than two hours later, I reach the Mississippi Delta, the fertile area around the Mississippi river that was also the birthplace of the blues. Cotton grows in the fields that line the quiet roads, a reminder of the industry that once powered the region, an industry that was sustained overwhelmingly by slave labour.

Mississippi, a state with a population of approximately three million, still has one of the highest proportions of black people in the United States – the 2010 census estimated that 37 per cent of the state’s residents are of African-American descent. But it is also the poorest, with 22 per cent of people living below the poverty line.

I arrive in Cleveland, a town of 12,000 people near the Mississippi river. It found itself propelled to the national stage earlier this year when a federal judge accepted a proposal by the Cleveland School District to finally end segregation in the district’s school system. Some 63 years after the landmark Brown v Board of Education case, which ruled that segregation in schools was unconstitutional, two schools in the town – East Side High and Cleveland High – were ordered to merge. For decades, East Side High was 99 per cent black. Cleveland High, across the railroad tracks in the small town, was racially mixed.

The March ruling finally brought to a close a case that stretches back to 1965 when a group of parents brought a suit on behalf of “negro children” to stop the district from maintaining segregated schools. More than 40 schools in Mississippi are embroiled in similar cases.

But despite the attention the Cleveland case has attracted, many in the community have pointed out that the issue is more complex than first appears – many African-American students, for example, have been quite happy to attend East Side High, drawn to its strong sports tradition and keen to attend a school that their parents and grandparents attended.

Others point out that segregation, though not legally enforced, is alive and well in other parts of the United States, where socio-economic issues and the racial income divide have meant that white parents have sent their children to private schools, with public education dominated by black students.

I arrive in the town a few days before the school term is about to start. There’s lots of activity around Cleveland Central High School as students from both schools prepare to gather for their first term as a joint school. The school proudly sports its new colours – purple and black – a symbol of its new identity.

Brenda Brown is an African-American resident of Cleveland and works as a custodian in the school, where she takes care of maintenance. Her daughter has always attended East Side High but is now moving to the newly merged school. How does she feel about the court decision? “I support it. It was separated for a long time, and it’s much better this way. This was always seen as the superior school,” she says, referring to Cleveland High. “If this is the superior school, then I want my daughter to have the superior education.”

Violet Kira is a 15-year-old student at Cleveland High. She is one of the minority of African Americans who have been attending the high school and is about to begin 10th grade. “I was fine about what happened either way, but I think it has brought about a lot of good things. I like what’s going to happen. There may be some difficult issues at the beginning, but things will straighten out in the end.”

As Cleveland Central High School’s students embark on their new term, the legal controversy over the school indicates the depths of challenges that remain in this region more than 50 years after James Meredith took a bold stand and tried to enrol at the University of Mississippi. As I leave Cleveland and trace the trajectory of the Mississippi river upstream towards Memphis, it’s clear the problem of racial segregation has yet to be resolved.