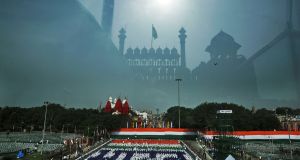 The Red Fort monument is reflected on the bulletproof glass covering the podium from where Indian prime minister Narendra Modi will deliver an independence day speech in Delhi on Tuesday. Photograph: AP 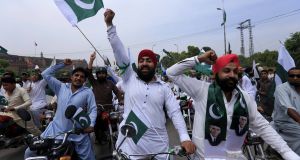 National flags are being hawked at traffic lights, the Indian parliament has been illuminated, and monkey traps have been installed around Delhi monuments as India prepares to celebrate the 70th anniversary of its independence.

Above Pakistan’s capital, Islamabad, this weekend, air force jets left a multicoloured trail as they rehearsed for the largest air show in the country’s history on Monday, when it celebrates its own creation in 1947.

Indian prime minister Narendra Modi will lead the celebrations in India on Tuesday with a traditional speech from the Red Fort in Delhi, where the country’s first leader, Jawaharlal Nehru, oversaw the lowering of the union jack 70 years ago at the stroke of midnight on August 15th.

Like Nehru, Mr Modi will oversee the hoisting of the Indian tricolour in its place, followed by a military parade through Delhi’s old city. Unlike the founding leader, Mr Modi is sourcing suggestions for topics in his speech through an official mobile phone app.

Mr Modi has sought in recent remarks to link independence day to Mahatma Gandhi’s Quit India movement, which launched on the same date in 1942, aiming to push the British out of the subcontinent. They were gone five years later.

Independence day this year should be a similar “day of resolve”, Mr Modi has said, and trigger five years of work to transform the country.

The new prime minister of Pakistan, Shahid Khaqan Abbasi, is also overseeing a flag-hoisting ceremony at the country’s parliament followed by a military parade and a 31-gun salute.

Though both countries became independent at the same moment, Pakistan marks the event one day earlier than India. Lord Mountbatten, the last British viceroy, administered the independence oath to Muhammad Ali Jinnah, the first governor-general of Pakistan, on August 14th, before rushing to Delhi to do the same for Nehru at midnight.

Across India, flag-hoisting ceremonies have been called for 8am sharp at schools, with students asked to recite an oath vowing to rid the country of its ailments, listed as poverty, corruption, terrorism, and discrimination by religion or caste.

The directive was met with resistance in West Bengal, run by one of Mr Modi’s fiercest opponents, Mamata Banerjee, whose education minister asked schools to ignore it. “The feeling of patriotism cannot be forced down someone,” he said.

Controversy has also intruded on independence celebrations in Uttar Pradesh, the country’s most populous state, where the government of hardline Hindu leader Yogi Adityanath was criticised for ordering Islamic schools to film their independence day ceremonies.

Islamic leaders in the state called it an attempt to test their patriotism in a year marred by high-profile instances of violence between Hindus and Muslims.

State ministers insist it is merely an administrative matter, helping Muslim schools to prove they are taking part in national holidays, a key requirement to receive government funding.

Observers in Delhi have detected a military theme to this year’s celebrations. Statues and posters of soldiers have been installed outside some posh Delhi markets, with others turning disused military jeeps into canvasses for street artists.

The past year has seen renewed military operations on the northern border with Pakistan, while hundreds of Indian soldiers remain locked in a standoff with China on disputed territory near the country’s east.

The Chinese vice-premier, Wang Yang, will be on hand for commemorations in Islamabad, signalling closer economic and financial ties between the two countries.

Independence commemorations will also be held around the world by members of the subcontinent’s vast diaspora, including in Singapore, the UK and Australia. – Guardian service