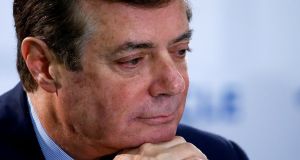 Paul Manafort, former manager of Donald Trump’s US election campaign. His house was raided by the FBI in July as part of a special counsel’s investigation into alleged Russian meddling in the 2016 presidential election. Photograph: Carlo Allegri/Reuters

FBI agents seized documents and other material from the Virginia home of Paul Manafort, President Donald Trump’s former campaign manager, during a July raid as part of a special counsel’s investigation into alleged Russian meddling in the 2016 US presidential election, a spokesman for Mr Manafort said on Wednesday.

The pre-dawn raid was conducted at Mr Manafort’s home in the Washington suburb of Alexandria without advance warning on July 26th, a day after Mr Manafort had met with staff members of the Senate intelligence committee, the Post said, citing unidentified people familiar with the probe.

“FBI agents executed a search warrant at one of Mr Manafort’s residences. Mr Manafort has consistently co-operated with law enforcement and other serious inquiries and did so on this occasion as well,” Mr Maloni said in an email.

The search warrant was wide-ranging and FBI agents working with special counsel Robert Mueller departed the home with various records, the Post reported.

The Federal Bureau of Investigation did not immediately return a request for comment on the report. Joshua Stueve, a spokesman for Mr Mueller’s office, declined to comment.