Satirist tries to shame Twitter into action over hate speech 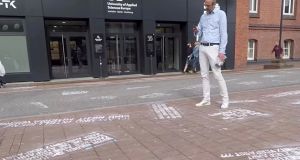 A man takes pictures of hate tweets, a part of the art project #heytwitter created by Shahak Shapira, outside Twitter office in Hamburg. Photograph: Reuters

The rants appeared from nowhere one morning, spray-painted on to the pavement before Twitter’s German headquarters in Hamburg.

There were 30 in all: “Jew Pigs”; “Niggers are a plague to our society”; “Germany needs another Final Solution for Islam”. Beside them, the tag line: “Hey Twitter, delete this shit.”

He moved to Germany from Israel in 2002 and, in recent years, has made a name for himself with provocative projects. Last year, in his “Yolocaust” campaign, he merged pictures of people taking selfies at the Holocaust memorial in Berlin with footage from Nazi death camps. Now he’s gone after the US social network.

“In the last six months, I flagged around 300 hate comments to Twitter, serious threats of violence and homophobia,” he said. “I got an answer on just nine from Twitter, each of them stating there was no violation of Twitter’s rules, and no answer on the rest.”

According to Twitter’s terms of service, posts to the service must not “promote violence against or directly attack or threaten other people on the basis of race, ethnicity, national origin, sexual orientation, gender, gender identity, religious affiliation, age, disability or disease”.

But Donald Trump’s medium of choice has come under attack from Berlin and Brussels for reacting slowly – or not at all – to problematic posts.

The European Commission, meanwhile, criticised Twitter for lagging behind other online services on hate posts, providing feedback on flagged posts in just 30 per cent of cases.

To shame Twitter into becoming more proactive on hate speech, Mr Shapira chose 30 of the postings Twitter had failed to remove – such as “People like you should be gassed you freak” – and turned them into stencils.

One night, he travelled to Hamburg and sprayed them on the pavement before the company’s German headquarters.

“When the Twitter people arrive at work,” he said in an online video, “they’ll have to look at all the lovely tweets their company so likes to ignore.”

In a statement, Twitter’s European head of public policy Karen White said the company had introduced a “host of new tools and features to improve Twitter” and would “continue to review and iterate on our policies and their enforcement”.

Mr Shapira’s video of his #heytwitter project ends with a cleaner removing just one tweet, from the privately-owned sliver of pavement before the Hamburg building.

The Israeli man’s conclusion: “That fits well with Twitter’s policy of cleaning in front of their own door and leaving the rest to be someone else’s problem.”