In southern Africa, boys still work in the kind of conditions St Patrick would have known 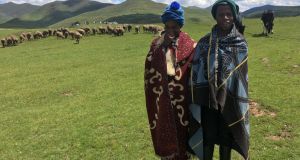 Shepherds Mothepu Khoisan and Aukose Mokhoro in Semonkong, Lesotho. At just 16, Mothepu spends almost every waking hour on the slopes, looking after a flock of sheep and a handful of cattle for a farmer. Photograph: Darragh Murphy

Working, often unpaid, in sub-zero temperatures on the slopes: Mothepu Khoisan knows a few things about the trials of St Patrick. Descended from the KhoiKhoi peoples who populated southern Africa before the arrival of Bantu, Portuguese, Dutch and British colonists, Mothepu is a shepherd.

The extinction of apex predators, the abolition of common lands and the end of subsistence farming has all but banished remote-life shepherds from western Europe, despite a persistently high mortality rate among sheep and lambs.

To find modern-day shepherds working in similar conditions to the teenage St Patrick, one must venture farther afield.

Some 16,000km farther, to be precise – Lesotho. A largely Catholic mountain kingdom landlocked by South Africa, Lesotho is one of the poorest countries in the world. Almost half its 2.2 million population lives on less than €1 a day. A staggering one in four people has HIV. It is also one of the highest physically, with 80 per cent of it over 1,800 metres.

A third of all boys, many of them orphaned, resort to working as shepherds, an occupation beset by dangers of human, animal and natural variety. Cold stalks the Drakensburg mountains. The average temperature in the rural village of Semonkong is about 11 degrees, dropping below freezing in June and July.

At just 16, Mothepu spends almost every waking hour on the slopes, looking after a flock of sheep and a handful of cattle for a farmer. His salary? A cow and five sheep, promised at the end of the year. For this, he is tasked with stopping livestock from eating other crops, and guarding against the dirty tricks of rival shepherds.

“To leave the sheep alone is very dangerous,” Mothepu says, speaking with the aid of an interpreter, teacher Tummy Lekhama.

“Other shepherds try to kill my sheep. These traditional herbs – they make the sheep have stomach cramps. Blood comes out their noses. This is the competition I am facing. The cattle can die if you don’t react quickly. I can’t let anyone to walk among the cattle or sheep, or they will get sick. It’s done deliberately, yes – and regularly.

“I started working as a herdboy when I was six,” he adds, “looking after the cows a long way from here. I’ve been getting tired a long time.” And, like every day, this is how Mothepu will spend St Patrick’s Day.

According to his Confessio memoirs, Patricius – possibly born Maewyn Succat – was a citizen of late Roman Britain, the son of Calpurnius, a local magistrate based near modern Carlisle (although it could have been Brittany).

Enslaved by Irish raiders, he worked as a shepherd in Ireland from age 16 to 22. Thereupon, he got out, fleeing to Britain and then France, studying to become a deacon and then bishop.

In human terms, the story of St Patrick can be seen not as one of conversion, but rather the effects of education on a simple shepherd.

Spurred by organisations like Sentebale, herdboy night schools are increasingly being set up to educate modern Lesothan shepherds.

Easily idealised, the life of an unlettered shepherd is tough.

“Being hired, other people will make them slaves and don’t pay them,” explains Sr Alla Massokela of the Good Shepherd Night School in Semonkong. Twenty pupils sit in the classroom the other side of a thin partition, having walked here after stowing their employers’ animals for the evening.

“Coming here helps them get to know money, and their rights,” Sr Alla adds. “Speaking English also helps them get other jobs, dealing with tourists.”

A local policeman, John Lethaha, lectures the students about crime. “There is always crime, especially the herdboys – they are on their own and vulnerable,” says school head Sr Rosemary Mokebe.

At this school by the Litsoenya river, Julius Mojoro is waiting. Now 39 and a part-time teacher, he became a herdboy at the age of 12. “My father was alive but he was somewhere in South Africa; we didn’t know where,” he says.

Back then, it was six sheep for a year’s work – not far off today’s wages. He sold the sheep and put himself through three years of school, before eventually starting work at Lesala orphanage, and helping to start the Lesala night school.

At a village gathering, the larger pastoral farmers agreed to allow the herdboys to attend the night school. “They couldn’t have said no, because it would have been illegal anyway. But there are sometimes a lot of misunderstandings as to the nature of the farmers and the shepherds, and we are looking out for them. Sometimes, after they have completed their contracts, the farmers will complain that they have done something bad to the animals, and they refuse to pay them.”

Crime is a recurrent theme. As young men, often orphans, on the margins of society, and with little semblance of a police force, the herdboys are at risk of offending.

“The shepherds were being ignored by society, and were sometimes being naughty and doing criminal things,” Majoro recalls. “Now I am very glad, because they are no longer the troublemakers. I spent a lot of time connecting with them; they were like wild people. Now they care for themselves.”

This article was supported by the Simon Cumbers Media Fund