Adams and McDonald express support for US special envoy 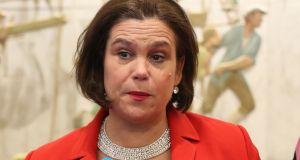 Sinn Féin’s Gerry Adams and Mary Lou McDonald have expressed their strong support for the appointment of a US special envoy to Northern Ireland, setting up a potential clash with Taoiseach Leo Varadkar who has questioned whether the appointment was needed.

Speaking in Washington on Wednesday following a meeting with officials at the US State Department, Sinn Féin leader Mary Lou McDonald said she had been assured the position was in the process of being filled, despite the surprise sacking of the secretary of state, Rex Tillerson, this week.

“I think history has demonstrated that the United States has a capacity to bring a very positive influence to bear on our process and I think that is still the case,” she said. “It is a good idea, and I think the administration as I understand is in the process of making that happen.”

Her comments came a day after the Taoiseach questioned whether a Northern Ireland envoy was needed.

He said that while “ongoing interest and engagement from the administration, Congress and Irish America” was welcome, he was “not sure that the appointment of an envoy is needed at this stage. The two parties came close to an accommodation... I don’t think brokerage is what we need.”

Tánaiste Simon Coveney met Mr Tillerson last month in Washington where the appointment of a US envoy to Northern Ireland was discussed. The secretary of state confirmed the role would be filled, despite cutbacks at the state department.

On the continuing political impasse in the North, the Taoiseach said the Irish and British governments may table their own proposals to break the political deadlock after Easter.

Northern Ireland has been without an executive since January 2017, one reason it is believed the White House did not extend an invitation to Ms McDonald or DUP leader Arlene Foster to attend the St Patrick’s Day reception this year.

Ms McDonald gave a cautious welcome to the proposal that the Irish and British governments would table their own proposals after Easter. “The Taoiseach hasn’t put any specifics on the table, we wait to see what he has in mind, and we will seek to meet with him.” She stressed that her party had managed to find a solution with the DUP, proving that there was “an answer to these questions”.

“We had an honourable accommodation and we won’t tolerate any negotiations backwards or downwards from that threshold,” she said. “Both London and Dublin have an obligation in accordance with the Good Friday agreement to make sure that those rights which are currently denied are in fact vindicated.”

Both Ms McDonald and Mr Adams reiterated calls for an intergovernmental conference to be convened to help break the impasse.

Mr Varadkar used a speech at a public forum to mark the 20th anniversary of the Belfast Agreement on Tuesday night to reach out to unionists, admitting that “recent statements and actions by Irish nationalists, including the Irish Government, about Brexit have been seen as unwelcome or intrusive”.

But he also stressed the need for the Irish language issue to be addressed, and for same-sex marriage to be made available in Northern Ireland.