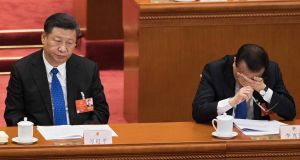 China’s parliament has laid out plans for a major government restructuring, including seven new super ministries, just days after a constitutional amendment cleared the way for Xi Jinping to rule indefinitely.

In moves announced at China’s annual rubber-stamp parliament, the National People’s Congress, delegates began the approval process for a series of plans that centralise power in China under the Communist Party and Mr Xi, who is placing himself at the core of the organisation.

On Tuesday, the parliament gave a third and final reading of a law to establish a powerful new anti-corruption agency directly under the control of the Communist Party, merging the existing anti-graft watchdog with one overseeing the civil service.

The new agency would provide “a centralised, unified, authoritative and efficient supervisory network under the [Communist] Party’s leadership”, said a policy document handed out to delegates in the Great Hall of the People.

The new body, called the National Supervision Commission, will be a political entity independent of China’s cabinet, the state council, and courts and prosecutors.

It will have the right to detain suspects for up to six months without seeking a judge’s approval, although authorities must normally inform the suspect’s family and work unit of their detention within 24 hours.

Many of the new measures being introduced at the congress have been aimed at giving the Communist Party an even more central role in government than it already occupies.

Mr Xi’s anti-corruption campaign has been one of the main planks of his administration since he took over the reins of power in 2012.

The ministries shake-up is the most significant in years.

Among the new agencies will be a ministry of ecological environment, which will take over responsibility for climate change and water pollution management from the national development and reform commission.

A natural resources ministry will be created to centralise functions previously carried out by different agencies around the country, including the ministry of land.

There will be a new national health commission that will partially replace the family planning commission, which currently deals with population control, an emergency management ministry and an agency to deal with culture and tourism.

The government plans to introduce a bureau of immigration management under the ministry of public security, and a national forest and grass bureau.

The government is also setting up a ministry to deal with China’s millions of veterans, following a number of demonstrations by military vets who want higher pensions and improved benefits, and a new rural affairs ministry.

China will also set up a new competition and food safety regulator in a bid to ramp up oversight of mergers and acquisitions and price-fixing.

Laws introducing the new ministries and agencies are set to be passed in coming days and the personnel will be announced before the end of the congress on March 20th.