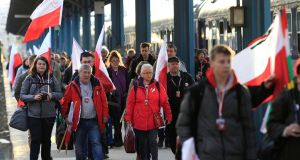 Polish right-wing activists arriving in Budapest to join a pro-Orban march on the anniversary of the 1848 Hungarian revolution. Photograph: Reuters/Bernadett Szabo

Polls suggest Fidesz will win easily, but mounting allegations of shady dealings against Mr Orban’s allies and close relatives could imperil a two-thirds majority that critics say he has used to undermine democracy and the rule of law.

Mr Orban will speak outside parliament on Thursday’s anniversary of the 1848 Hungarian revolution against Habsburg rule, and his allies hope 200,000 people will march through Budapest before his address.

While Mr Orban can be expected to reiterate his hard-line anti-immigration and Eurosceptic stance, opposition parties and civil society groups will hold rival rallies, and are likely to focus on graft allegations now swirling around Fidesz.

The latest claims, published in the Magyar Nemzet newspaper, have astonished even opposition figures who have long accused the Fidesz government of parlaying political dominance into riches for top members and key supporters.

The newspaper says that Lajos Kosa, a senior Orban ally and minister without portfolio in his government, was entrusted with handling €4.35 billion by a mystery investor in 2013, whom he advised to place the money in Hungarian state bonds.

Magyar Nemzet also alleges that Mr Kosa and the same investor agreed that his mother would receive a gift of €2.6 million.

Mr Kosa did not deny the authenticity of a published agreement on the €4.35 billion, but insisted he had been misled by a woman who “carried out a series of frauds...and duped several people including me with a well-built story”.

“I never accepted a single penny, my conscience is clear...and I believe today we already know this was a scam,” he claimed, saying the deal never went through.

Jobbik, a party that is trying to move away from its far-right roots, has called for an urgent parliamentary inquiry into “Kosa-gate”.

“The whole situation is surreal. I thought the whole thing was a joke until Lajos Kosa admitted that the notarised document...was true,” said Marton Gyongyosi, a senior member of Jobbik, which is currently lying second in polls.

The Socialists, which surveys put in third place, want Mr Kosa to pull out of the elections, while Viktor Szigetvari, a leader of the smaller liberal party Egyutt, said Fidesz had stumbled into a corruption “minefield” ahead of the vote.

Fidesz backers now dominate Hungary’s business world, including Lorinc Meszaros, a childhood friend of Mr Orban and former pipefitter who has become mayor of their home town and one of the country’s richest tycoons.

Mr Szigetvari said he believed the stories were having a huge impact on Fidesz’s popularity.

“The Olaf report...caught the prime minister and his family. It’s so clearly checkmate, an obvious case of corruption. Even in the rural constituency where I’m running, where access to free media is not as easy as in an urban area, people know about this.”

An independent politician surprisingly won a byelection in a Fidesz stronghold last month, prompting Hungary’s fractious opposition parties to seek ways to co-operate in the April 8th elections. However, no agreement has been reached to field joint candidates.