Syria remains in the middle of deadly power plays 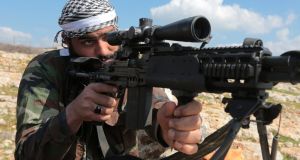 The UN and western powers have focused on the Syrian army’s offensive against jihadis in eastern Ghouta abutting Damascus, while Turkish forces have laid siege to the city of Afrin with a population of 350,000 in the Kurdish district of Afrin in northwest Syria.

Turkish president Recep Tayyip Erdogan has said that if civilians were not present in the city, his forces would have taken it “in three days”.

Turkish forces have seized control of the periphery of the Afrin canton and merged it with the area they hold along the Turkish-Syrian border stretching from Azaz westwards to Jarablus on the Euphrates river.

Ankara argues the Syrian Kurds are allied to Turkey’s insurgent Kurds and threatens to occupy the entire 911km-long border to cut the connection between the Turkish Kurdish Workers’ Party and the Syrian Kurdish People’s Protection Units (YPG).

Having reinforced Afrin with several thousand fighters, the YPG has called for expatriate Kurds and Syrians to protest against the Turkish invasion and prevent Turkey from dividing Syria.

Although there have been pro-Kurdish demonstrations in Germany, Britain and France, the UN and Turkey’s Nato allies have done nothing to halt the Turkish offensive. Russia, which controls the skies over western Syria, has failed to intervene and the US, ally of the YPG, has abandoned Afrin to the Turks.

Several thousand civilians have fled the Turkish troops, tanks and surrogate Free Syrian Army (FSA) militia. Most have taken refuge in Afrin city; others have gone south to the nearby government-controlled villages of Nubl and Zahra or Aleppo.

The Kurds claim one million civilians live in the canton due to an influx of refugees from al-Qaeda-held Idlib province to the south. Since Ankara launched its offensive on January 20th, the Britain-based Syrian Observatory for Human Rights says 204 civilians, 71 Turkish soldiers, 343 FSA recruits and 376 Kurdish fighters have been killed. Several dozen pro-government “popular” reinforcements have also been killed.

A district in the Aleppo governorate, Afrin contains 360 Kurdish villages and is known as “Kurd Dagh”, the Kurdish mountain. The verdant canton located on the Afrin river produces fruit and nuts and is famous for olives. Kurds from Afrin have a deep connection with the district, which had been largely peaceful during the seven years of devastating warfare.

The Syrian army withdrew in 2012 and left the Kurds to manage their own affairs. They joined with brethren to the east to form Rojava, a self-declared Kurdish-ruled zone liberated from Islamic State by the YPG with backing from the US. Erdogan regards Rojava as a threat to Turkey and vows to eradicate it.

According to The Independent’s Patrick Cockburn, writing from Qamishli in northwest Syria, Turkey’s surrogate FSA militia recruited Islamic State and al-Qaeda fighters who were expelled from Raqqa and eastern Aleppo. Although the Turks have banned the use of suicide bombers, a jihadi trademark, in the Afrin operation, FSA jihadis have tried to impose their radical religious ideology on Sunni Muslim and Yazidi Kurds living in conquered villages, threatening to behead those who resist.

Erdogan has declared his intention of ethnically cleansing Afrin, with the aim of transforming the overwhelming Kurdish majority into a 35 per cent minority. His plan is to shift Syrian Arab refugees from Turkey to Turkish-occupied Syria to create a “safe zone” along the border.

In contrast with Erdogan’s plan, the aim of the Syrian army fighting four jihadi Arab militias in eastern Ghouta is to re-establish government rule over the towns, villages and countryside east of the capital and end attacks and mortar fire into the city from this area.