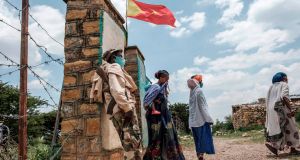 A polling station is seen during Tigray’s regional election, in the town of Tikul. Photograph: Eduardo Soteras/AFP via Getty Images

Ethiopia’s northern Tigray region held elections on Wednesday, in a move that has alarmed the central government, who are worried about growing ethnic conflict and the possibility of a separatist movement gaining ground there.

Voters turned out for the regional election despite federal authorities saying it is unconstitutional and that results will be void.

The Tigray region, which borders both Sudan and Eritrea, is home to roughly 5 million people. Tigrayans have traditionally wielded disproportionate power in government, though that has been waning in the last two years.

National elections were initially scheduled for August, but in March they were postponed indefinitely because of the coronavirus pandemic. Ethiopia now has more than 60,000 confirmed Covid-19 cases, and more than 900 deaths.

Prime minister and 2019 Nobel Peace Prize winner Abiy Ahmed criticised the decision to proceed with Wednesday’s vote, which he said was illegal. “Those who construct a shanty are illegal dwellers as they don’t have land deeds,” he told state media. Despite this, he ruled out military intervention.

Mr Abiy came to power in 2018, calling for an end to ethnic separatism. Last year, he won the Nobel Peace Prize for introducing reforms in Ethiopia, as well as agreeing a peace deal with Eritrea. The two countries had been enmeshed in a border dispute for 20 years. Tens of thousands of people were killed in the first two years of the conflict.

Critics say the award was premature and ethnic tensions are simmering. Ethiopia has more than 80 ethnic groups and is Africa’s second most populous country, with a population of more than 109 million.

On Monday, four journalists were prevented from boarding a plane to travel to the Tigray region and report on the elections. Their phones, laptops and identification documents were also confiscated, and social media accounts examined.

“We urge Ethiopia’s federal authorities not to undermine the significant steps taken to increase media freedom over the past two years by attempting to police what journalists can and cannot report,” the Ethiopian Foreign Correspondents’ Association said in a statement.

Mr Abiy has also been facing challenges in the rest of the nation.

On June 29th, the killing of Hachalu Hundessa, a popular protest singer from Mr Abiy’s own Oromo ethnic group, led to protests and the government implementing a nationwide internet shutdown. Hundessa (34) was shot in a suburb of capital city Addis Ababa.

At least 178 others died in the unrest in the aftermath of the killing, while thousands of people were arrested, including dozens of opposition members and journalists. Detainees include prominent Oromo Federalist Congress leaders Jawar Mohammed and Bekele Gerba, as well as Eskinder Nega and Sintayehu Chekol, from the Balderas Party. They are accused of being involved in the violence.