Thousands of people have been forced to evacuate after fire tore through the Moria migrant camp in Lesbos, Greece. Video: Reuters 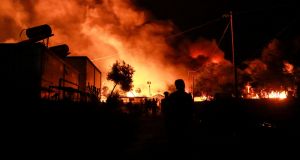 Migrants leave as a fire burns in the Moria camp on the island of Lesbos on Wednesday. Photograph: Manolis Lagoutaris/AFP via Getty Images

Thousands of asylum seekers have fled a blaze that swept through an overcrowded camp on the Greek island of Lesbos, in what critics condemned as a predictable result of hardline EU migration policies.

Brussels announced it would fund the immediate transfer of hundreds of unaccompanied children and teenagers from the Moria site to the Greek mainland, after the fires gutted shacks and container homes in a facility long notorious for its squalor.

Kyriakos Mitsotakis, the Greek prime minister, declared a state of emergency on the island and warned the government would not allow asylum seekers to leave Lesbos for the mainland.

“I recognise conditions are tough at Moria but there can be no excuse for a violent response when it comes to health controls,” he said in a video posted on his Facebook page, in a reference to the multiple fires in the early hours of Wednesday, whose cause has not been independently confirmed.

“There will be some restrictions on movement and local shutdowns but I feel sure the islanders will understand and will be supportive.”

The premier said Greece would continue to maintain tight controls on its maritime border with Turkey to prevent renewed arrivals of asylum seekers. He has denied accusations that the country’s coastguard violated international human rights law by pushing back boats filled with asylum seekers into Turkish waters.

The fire comes just weeks before the European Commission is due to launch its latest effort to reform the EU’s migration and asylum system after years of wrangling since the 2015-16 spike in arrivals in the bloc. Critics charge that the dismal conditions in Moria and other Greek island camps reflect an increasingly harsh effort by EU countries to discourage people from even trying to make the journey to Europe.

“Moria was the emblem of an EU deterrence policy in which the warehousing of asylum seekers in humiliating circumstances was THE point,” tweeted Daniel Howden, senior editor at the Refugees Deeply digital media project. “Any other approach is seen as creating a ‘pull factor’. This base assumption is impervious to evidence.”

Police on the island said there were no immediate reports of injuries but that several thousand asylum seekers fled into the hills surrounding the camp and were still unaccounted for, more than 12 hours after the blaze began. One official said none of the 36 camp residents reported to have tested positive for coronavirus on Tuesday had so far been traced.

Local media websites posted videos showing a stream of people moving along the main road outside the camp, most loaded down with bags and backpacks. Moria was placed in quarantine last week after the first case of Covid-19 was reported, a Somali man who returned to live in a tent after picking up asylum papers in Athens.

“We’re facing a major humanitarian crisis and we’re doing everything we can on the ground,” George Koumoutsakos, Greece’s deputy migration minister, said. About 3,500 asylum seekers out of about 13,000 living in containers in the fenced-off centre of the camp and in tents and home-made shacks in the surrounding olive groves were made homeless by the blaze, he added.

He claimed that several fires that broke out simultaneously in the early hours were prompted by “the anger and frustration of some camp residents because of being under quarantine”.

European Commission president Ursula von der Leyen expressed sorrow and said she had asked Margaritis Schinas, a commission vice-president and Greek national, to travel to the country immediately. Ylva Johansson, home affairs commissioner, said she had agreed to finance the move of the remaining 400 unaccompanied children and teenagers at the camp to the mainland and their accommodation there. “The safety and shelter of all people in Moria is the priority,” she said.

“We have to clarify as quickly as possible with the EU Commission and other helpful EU member states how we can support Greece,” he tweeted. “This also includes the distribution of refugees among those willing to accept them in the EU.”

International volunteers working at the Moria camp – which is built to accommodate just 4,000 people – say conditions are harsh, with many residents lacking proper access to washing facilities.

Greece’s migration ministry has moved more than 6,000 asylum seekers from Moria to camps on the mainland this year. Arrivals by small boat from Turkey have slowed because of the pandemic and reported pushbacks at sea by the Greek coast guard.

The EU denies it is pursuing a “Fortress Europe” immigration policy but rights groups say the bloc has increasingly outsourced control of migration to third countries, such as Turkey and Libya, and frontier camps such as Moria.

Efforts by Brussels to revamp the bloc’s creaking asylum rules have been hobbled by the refusal of some member states, such as Hungary, to accept compulsory allocations of asylum seekers. – Copyright The Financial Times Limited 2020