Coronavirus: Gatherings of more than six banned in England 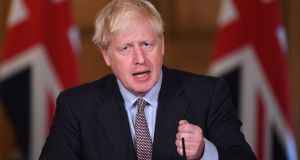 British prime minister Boris Johnson said the UK must act to stop a second wave of coronavirus after evidence showed a sharp rise in the number of cases across England, announcing the ‘rule of six’ will apply to all gatherings in any location. Photograph: Stefan Rousseau/PA Wire

Tough new rules that restrict gatherings to just six people could be in place until the spring to stop a winter surge of coronavirus, the UK government’s chief medical officer has warned.

Prof Chris Whitty said the period “between now and spring is going to be difficult” and said the public should expect the new measures to be in place for a number of months.

“Everybody I think in the country will know, and it has been widely reported that the period over autumn and winter, which is the period when all respiratory viruses have an advantage because people crowd together, more things are done indoors amongst other reasons, it is going to be difficult,” he said.

“I think in terms of the existing restrictions, people should see this as the next block of time that may not last for many months, but it is very unlikely to be over in just two or three weeks.”

He said the time would come to look again at the restrictions but stressed “people shouldn’t just see this as a very short-term thing, they should see it over the next period”.

Speaking at a press conference with Prof Whitty, British prime minister Boris Johnson said the UK must act to stop a second wave of coronavirus after evidence showed a sharp rise in the number of cases across England, announcing the “rule of six” will apply to all gatherings in any location.

He also announced it would become mandatory for hospitality venues to collect test and trace details, which was previously only government guidance. Pubs, restaurants, cafes and other venues will face fines if they do not collect contact-tracing details from customers, in order to improve compliance with NHS test and trace.

He said he deeply regretted having to reintroduce tougher restrictions. “Of course I don’t feel comfortable about it,” he said. “It breaks my heart to have to insist on these restrictions upon individuals, upon families, grandparents. There’s nobody in government who conceivably wants to do this.”

Explaining his decision to reduce social gatherings to six people, Mr Johnson said: “I know over time the rules have become quite complicated and confusing,” referring to previous guidance on the numbers of households allowed to meet and variations on numbers indoors and outside.

Mr Johnson said he had a particular message for young people, including students returning to university, the group in which there has been the largest increase in the number of infections.

“My message to students is simple. Please, for the sake of your education and your parents’ and your grandparents’ health: wash your hands, cover your face, make space, and don’t socially gather in groups of more than six, now and when term starts.”

He said universities would be asked not to send students home if they found positive cases.

Prof Whitty said school closures could be considered as a last resort if the surge in cases continued. “At the moment the rates are still very low. If there were to be a change in that, if there were to be a much broader increase in rates including of school-age children, I think that the current policies would have to be looked at again, as in the other areas,” he said.

The prime minister said plans to reopen concert venues and sporting events would be reviewed, including plans to introduce crowds in football grounds in England from October 1st.

The prime minister said he hoped a bold plan of mass testing would allow people to lead “more normal lives” in the coming months, a plan being piloted in Salford next month.

“There are a number of challenges. We need the technology to work,” he said. “We need to source the necessary materials to manufacture so many tests. We need to put in place an efficient distribution network. And we need to work through the numerous logistical challenges.”

However, in a nod to the major issues experienced across England by people trying to book tests, he said: “We are increasing our testing capacity further to meet rising demand. You can help by only booking a test if you have a fever, a new continuous cough, or you’ve lost your sense of taste or smell – if you don’t have those symptoms and haven’t been asked to book a test, please don’t.”

Explaining the data, Prof Whitty, said the number of cases overall was “going up really much more rapidly over the last few days” and rising “quite steeply” for young people aged between 17 to 21.

Prof Whitty said the UK was following a pattern similar to France, where rates of infection have continued to rise. He said Belgium had followed a similar pattern but took decisive action and cases had stabilised.

The number of cases per 100,000 in the UK has risen from 12.5 to 19.7 – which health officials called a significant rise that affected all age groups, but particularly younger people.

The government believes the restriction to six people – whether it be in private homes, in all public spaces or outdoors – and will be simple to understand and easier to enforce.

The number includes children, and larger numbers are only allowed when a family group or support bubbles exceeds it. It is understood health officials have become concerned that the two-household rule had not stopped large numbers of people from gathering.

Exemptions include workplaces, universities, colleges, schools and childcare as well as places of worship and moving home. Weddings, funerals and “Covid-secure” team sports will also be allowed to go ahead under the previous maximum of 30 people.

To help police the new test-and-trace rules, the government will set out a package of supports to local authorities, including a register of recently retired environmental health officers, to allow them to enforce the new rules. There will also be a renewed focus on border rules, including simplifying the arrival forms and ensuring better enforcement. – Guardian