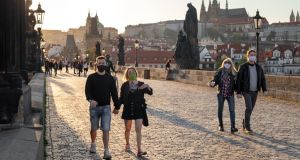 Pedestrians on the Charles Bridge, Prague, during the coronavirus pandemic in April. Photograph: Getty Images

The Czech government has decided that all people must wear face masks inside public buildings from Thursday after a record spike in new coronavirus cases that topped 1,000 for the first time.

Health minister Adam Vojtech announced the measure on Wednesday after his ministry reported a one-day spike in Covid-19 infections of 1,164, while neighbouring Germany, a country almost eight times larger in population, had 1,176.

“Due to the worsening epidemiological situation... we agreed with experts that we will implement compulsory wearing of face masks indoors across the Czech Republic as of tomorrow,” he said, adding the ministry would give details later in the day.

While the Czech Republic was among the first European countries to adopt mask wearing at the start of the Covid-19 pandemic in March, rules have largely been relaxed since then.

The capital Prague had already tightened measures after a spike in the number of cases, making the wearing of masks compulsory on public transport and ordering all bars to close by midnight.

The daily tally of new cases across the country of 10.7 million people has mostly exceeded 500 so far this month, well above a daily peak of 377 in March during the first wave of infections.

Czech authorities, which were quick to impose a strict lockdown in March to halt the spread of the virus, want to avoid costly restrictions again after the economy shrank by 11 per cent in the April-June period on an annual basis.

The Czech spike in Covid-19 infections in the last two weeks has been among the fastest in Europe, outpaced only by Spain, France, Malta, Romania and Croatia, said the European Centre for Disease Prevention and Control (ECDC).

However, the death toll has remained lower than in many other European countries, with 441 fatalities reported as of Wednesday out of a total of 29,877 cases.

Hospitalisations have risen in the past week but remain below this year’s peaks. The government says many new cases are asymptomatic and among the younger population.