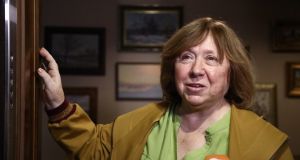 Nobel Prize-winning author Svetlana Alexievich at her apartment in Minsk. Ambassadors from several EU states gathered at her flat after she said unidentified men kept ringing her doorbell. Photograph: TUT.BY/AFP via Getty

Nobel Prize-winning Belarusian author Svetlana Alexievich has accused the country’s president Alexander Lukashenko of terrorising his opponents, as more protest leaders were jailed on suspicion of causing a threat to national security.

Masked men took lawyer Maxim Znak from his office on Wednesday, leaving Ms Alexievich as the only leader of the opposition’s “co-ordination council” who has not been imprisoned or coerced to leave Belarus in recent days.

The security services tried to force Ms Kolesnikova to leave Belarus for Ukraine on Tuesday, but she tore up her passport and climbed out of a car window to thwart their efforts, according to two opposition figures who were with her, and continued to Kiev. She is now in detention in the Belarusian capital, Minsk.

“First they kidnapped our country, and they are kidnapping the best of us. But hundreds of others will replace those torn from our ranks. It’s not the co-ordination council that has risen up. The country has risen up,” Ms Alexievich (72) wrote.

“We didn’t prepare a coup . . . We wanted dialogue to start in society. Lukashenko says he won’t talk with the ‘street’, but the street is hundreds of thousands of people,” she added. “People are going out into the street with their little children, because they believe they will triumph.”

Reporters and ambassadors from several EU states gathered at Ms Alexievich’s flat in Minsk after she said unidentified men were outside her apartment building and kept ringing her doorbell.

“What is happening is terror against the people,” said the 2015 winner of the Nobel Prize for Literature, who until now has played a relatively low-key role in the biggest upheaval of Mr Lukashenko’s 26 years in power.

His implausible claim to have won an August 9th election with 80 per cent of votes sparked huge protests that were met with a brutal police crackdown, in which at least three people died, hundreds were injured and thousands detained.

Opposition candidate Svetlana Tikhanovskaya, who insists she won the ballot, fled to neighbouring Lithuania after allegedly being threatened by the regime. She reluctantly entered politics when her husband Sergei, a popular blogger, was jailed in May.

“I believe it will be a strong signal if the EU nominates Svetlana Tikhanovskaya and her husband Sergei . . . for the Nobel Peace Prize, to pay tribute to all Belarusians engaged in this most peaceful movement in years,” said Donald Tusk, a former Polish premier and ex-president of the European Council.

Mr Lukashenko says the west is behind the protests and he has turned to the Kremlin for support. He is expected to meet Russian president Vladimir Putin in Moscow next Monday.