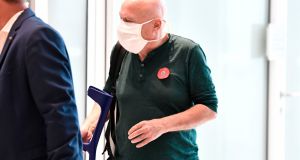 The wounded survivors of the Charlie Hebdo massacre testified on Wednesday, on the sixth day of the trial in Paris of the killers’ accused accomplices.

Five years and eight months after the attack which claimed 12 lives, two witnesses hobbled into the courtroom on crutches.

The judge read depositions from a third journalist, whose jaw was blown off, and the newspaper’s financial director, who suffered a mental breakdown. Neither felt able to face the court.

But the paper’s editor-in-chief, whose shoulder was shattered by a Kalashnikov bullet, struck a defiant note, saying he cannot regret having published the cartoons of the Prophet Muhammad which the Kouachi brothers used to justify the slaughter.

Simon Fieschi, who was responsible for the satirical weekly’s presence on the internet and social media, is only 32, but he moves like an old man.

On that terrible January morning, Fieschi heard “Allah Akbar,” followed by a commotion. He was hit by two bullets. One went through his neck, damaging his spinal column.

“My field of vision tipped like this,” he said, tilting parallel hands. “I lost consciousness, which saved my life.”

When Fieschi regained consciousness, “I felt nothing. The only thing I remember is a trail of blood, probably mine and my colleagues’. Rescue workers walked through it. That is the image that stayed with me.”

Even after they scar, nerves continue to send pain signals, Fieschi said. “One lives with the pain for life.” He suffers “episodes of sadness, anger, disorientation, a sense of unreality, as if it happened to someone else”.

Fabrice Nicolino, Charlie Hebdo’s ecology correspondent, is the only person in France to have been wounded in two distinct Islamist attacks. The first was an explosion at a Jewish film festival in 1985.

“It may have helped me,” Nicolino mused. “My colleagues who died stood up and took bullets in the chest. The moment I heard shooting, I dived to the floor. I took three bullets, one in each leg and one in the abdomen.”

After the attack, Nicolino moved from an immigrant suburb of Paris to the west coast of France. “I couldn’t stand seeing bearded men and veiled women. Some days I couldn’t go out. It was unjustified, but I couldn’t help it,” he said.

In the most upbeat moment of the day, Nicolino recounted “Charlie’s” support for his petition against pesticides. “Charlie isn’t just living in this ambience of furious death,” Nicolino said. “Charlie is life. I really need to say that.”

But Nicolino’s mood turned bitter as he told of working conditions at Charlie now: six armoured doors, metal detectors, airlock rooms, police escorts who point their guns at surrounding windows when he walks in the street. “We are living under siege, and nobody cares,” he said.

Islamism is a form of totalitarianism, Nicolino insisted. French intellectuals who called the satirical newspaper racist and Islamophobic “are not the direct cause of the attack, but they prepared the ground for it. I will never, never, never forgive them”.

Nicolino’s recriminations gained momentum, morphed into condemnation of the philosopher Jean-Paul Sartre and the generation of French leftists who unconditionally supported communist totalitarianism. “France never asked why these people supported dictatorships,” he said.

Laurent Sourisseau, known as Ris, a cartoonist and the editor-in-chief of Charlie Hebdo, continued Nicolino’s outburst against “religious totalitarianism, fundamentalism” and “intellectuals who justify it”.

Like Nicolino, Ris had the reflex of throwing himself on the floor rather than standing up that morning. “I thought, this is the end of my life. It all stops here. I was waiting my turn. I wondered if I would take a bullet in the head or lungs. I thought those were the last moments of my life. Every second seemed precious. I felt a blow to my back, like being hit with a shovel. Hot metal entering my body.”

Despite his shattered shoulder, Ris was determined to resume publication of Charlie quickly. “The attack raised a political problem: would we let a newspaper disappear because of a terrorist attack? The newspaper had to come out, not only for the memory of the victims. Even if we were wounded and exhausted. It was the moment of truth in the history of the paper.”

The loss of his comrades was “a mutilation perhaps worse than bullets,” Ris said. “There’s a kind of embarrassment in the fact that we continue our lives. Sometimes I feel as if I am seeing or doing things for them. I imagine what they would say. They are still with me.”

Last week, Ris took the decision to reprint the Muhammad cartoons. Asked whether he regretted “the publication of these cursed caricatures that created a catastrophe”, he said no. “Either you fight for liberty or you’re a slave. That’s all. For me, the fight for liberty is a fight for life. There can be no regretting.”