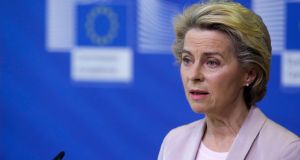 The European Union has requested an extraordinary meeting with British counterparts to discuss the implementation of the agreement to avoid a border on the island of Ireland, expressing deep concerns after Downing Street revealed plans to override the deal.

Maroš Šefcovic, a European Commission vice-president who co-chairs the EU-UK joint committee on the implementation and application of the withdrawal agreement, said he had expressed the EU’s “strong concerns” to his counterpart British cabinet minister Michael Gove in a phonecall and asked for a meeting.

“As far as I know this is an unprecedented situation. Therefore you understand that we take it very seriously . . . I think this would require a physical meeting. I am available for the meeting anytime,” Mr Šefcovic told media.

“We have to insist that what was signed and agreed should be respected because of the importance of this agreement for our future relationship, our current relationship, and especially for people in Northern Ireland and Ireland.”

Very concerned about announcements from the British government on its intentions to breach the Withdrawal Agreement. This would break international law and undermines trust. Pacta sunt servanda = the foundation of prosperous future relations.

Some observers in Brussels fear that talks could collapse if the British government follows through on its announcement that it intends to break international law by overriding parts of the agreement, which it negotiated and adopted in parliament in late 2019.

It published the controversial legislation, the internal markets Bill, on Wednesday.

“I think they are fully aware that what the lack of respect for the signed and ratified treaties might mean for the future,” Mr Šefcovic said. “It was stated on multiple occasions that the way we would implement the withdrawal agreement would set the scene, would set the level of confidence which we need to negotiate in good faith.”

EU and UK negotiators have just weeks to agree a complex deal to govern their future relationship covering everything from fishing rights to trade in goods and services. The British government has said a failure to reach a deal, which is forecast to cause deep economic damage to the UK and its neighbours including Ireland from January 1st, is a “good option”.

European Commission president Ursula von der Leyen responded by reminding Britain of the concept of “pacta sunt servanda” or “agreements must be kept”, which is a founding principle of international relations and law.

“Very concerned about announcements from the British government on its intentions to breach the Withdrawal Agreement,” Dr von der Leyen wrote on Twitter.