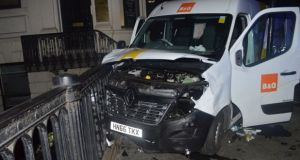 Eight people were killed and 48 injured in less than 10 minutes of “high and terrible” drama as terrorists went on the rampage in the heart of London, an inquest has heard.

The London Bridge inquests began at the Old Bailey on Tuesday with details of the attack on June 3rd, 2017, being read out by judge Mark Lucraft QC, the chief coroner. Details emerged of an off-duty nurse killed as she tried to help the wounded, and a passerby who desperately tried to tackle the terrorists with a skateboard.

Families of those killed were in court as the inquest began. The family of Xavier Thomas, one of those killed in the attack, told of the impact of their loss, saying: “Our whole world has fallen apart.”

The judge said: “The attack as a whole took less than 10 minutes from the van driving along the pavement to the attackers being stopped by police.”

Eight people were killed and the three attackers were shot dead by armed police.

The judge said the attacks began with a rented van being driven into pedestrians on London Bridge on a Saturday evening: “As the van drove across the bridge it repeatedly mounted the pavement and struck people walking.”

Christine Archibald (30) from Canada and 45-year-old Xavier Thomas, a French national, were killed after being run over. Mr Thomas was flung over the side of the bridge by the impact of the van and recovered from the River Thames days later.

After ploughing into pedestrians on London Bridge, they ran through Borough market stabbing people with knives tied to their wrists, the judge said.

He added: “The lives of many people were torn apart by what took place in less than 10 minutes of high and terrible drama.”

The atrocity continued as the terrorists stabbed the 21-year-old Australian Sara Zelenak, an au pair.

Sebastien Belanger, a 36-year-old French national, “was cornered by all three attackers”, the coroner said, but bravely fought back and died after suffering “horrific injuries”.

Butt, the attack ringleader, then stabbed Alexandre Pigeard (26), a French restaurant worker, with the 28-year-old Australian Kirsty Boden killed next after going to help the injured. She was a nurse at Guy’s and St Thomas’ hospital and was on an evening out with friends.

The judge said Butt made a “swinging motion” at Ms Boden, who ran towards an alleyway where she was later found dead from her injuries.

The attack happened on the evening of the Champions League final, which was being watched in a pub by 32-year-old James McMullan, the only Briton killed that evening. He went out for a cigarette and was caught up in the attack. He was also found dead in an alleyway.

Some people, the inquest heard, were stabbed while on the ground. Two police officers who were unarmed tried to halt the attack and were also injured.

He only had a skateboard, and died after being stabbed.

The judge said: “After killing Ignacio the attackers jogged along Borough High Street.”

Moments later, the three were confronted by armed police and shot dead.

Attending the first day in court was the Met police commissioner, Cressida Dick, and Ian Dyson, the commissioner of the City of London police.

The attack ringleader, Butt, was on MI5’s radar at the time of the attack and on its list of 3,000 terrorist suspects.

The atrocity was only ended when the attackers, who had taken steroids, tried to kill armed police officers, who shot all three dead.

Butt was under active MI5 investigation when he struck, and was suspected of potential involvement in attack planning. He was also on bail for a criminal matter.

He was described as increasing his operational security and by 2017 worked at the Ummah fitness centre in east London, where he met his fellow attacker Redouane. He taught Koran classes to youngsters alongside his other co-conspirator, Zaghba.

The London Bridge attack was one of four terrorist atrocities in the UK between March and June 2017. A review into them for the government by the barrister David Anderson QC said: “The unpalatable lesson of London Bridge is that even priority subjects of interest in respect of whom sound decisions are being made . . . may retain the ability to conceal their attack planning from the authorities.”

The inquest may test those conclusions and continues.–Guardian