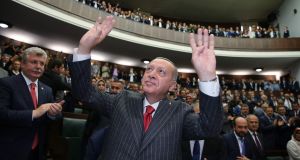 Turkey’s president Recep Tayyip Erdogan praised a decision to repeat Istanbul’s mayoral election, which his party narrowly lost, saying a rerun would remove the pall cast over the March vote by allegations of “organised corruption”.

The Supreme Electoral Council late on Monday nullified the results of the March 31st poll in which the opposition’s Ekrem Imamoglu defeated the ruling party’s candidate by about 13,000 votes. A new election will be held on June 23rd.

On Tuesday the Turkish lira fell to its lowest level since October while the country’s bonds came under pressure, as the controversial decision to annul the election results sharpened investor concerns.

Mr Erdogan’s ruling Justice and Development party (AKP) had contested the Istanbul poll result, claiming voter fraud and other irregularities. The president told members of his party that he had initially been prepared to accept the result but that a series of recounts in the ensuing weeks revealed that “15,000 AKP voters’ electoral will had been usurped”.

“I sincerely believe there was organised corruption and full illegalities and irregularities in the Istanbul municipality election,” said Mr Erdogan.

The decision to rerun the mayoral election outraged the opposition, with the head of Mr Imamoglu’s Republican People’s party (CHP) accusing the electoral board members of colluding with the AKP. “You are destroying the rule of law and justice. With this decision, they rejected the people’s will. They were unable to prove that a single voter committed fraud,” said Kemal Kilicdaroglu, CHP chairman.

Meral Aksener, head of the opposition Good party that backed Mr Imamoglu, said the decision to nullify the March vote amounted to “theft”.

A number of smaller parties, including the conservative Felicity party which won about 100,000 votes in the disputed poll, also expressed support for Mr Imamoglu, signalling they could withdraw their candidates from the rerun election.

Tusiad, Turkey’s largest business group, said the rerun would distract from efforts to rescue the country’s economy from recession. “During a time when we need to be focused on an agenda of comprehensive economic and democratic reforms, a return to an election environment is worrisome,” it said on Twitter.

Mr Erdogan lashed out at members of the business community for their “strange” remarks after the election body’s ruling. “If you work in the economy or are a businessman, do your job,” he said. “If you are aiming to intervene with the electoral judiciary, then we know where you stand and our view of you will change accordingly.” – Copyright The Financial Times Limited 2019