Orban drifts towards exit of biggest European bloc before elections 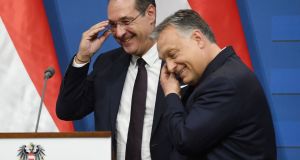 Austria’s vice-chancellor and chairman of the Freedom Party FPOe Heinz-Christian Strache talks with Hungarian prime minister Viktor Orban (right) at the end of a press conference at the Carmelite monastery of the prime minister’s office in Budapest on Monday. Photograph: Attila Kisbenedek/AFP/Getty

Hungarian prime minister Viktor Orban is increasingly isolated in the EU’s main centre-right bloc ahead of this month’s European elections, after he came out against its leader’s bid to become president of the European Commission.

Mr Orban has met the heads of Italian and Austrian far-right parties in recent days and urged the centre-right European People’s Party (EPP), which includes Fine Gael, to focus on working with nationalist groups to stop immigration into the EU.

The EPP suspended Mr Orban’s Fidesz party in March over its hard-line policies, intolerant rhetoric and constant criticism of Brussels, but he has continued to harangue the bloc in the run-up to the May 23rd-26th vote for the European Parliament.

“The candidates for commission president are all clearly unsuitable,” Mr Orban declared on Monday, ending his support for EPP chief Manfred Weber.

“Weber would have been good for us . . . but he announced that for him not only was there no need for Hungarian votes, but that he didn’t want to become president with those votes,” Mr Orban said, as he stood alongside Austria’s nationalist vice-chancellor Heinz-Christian Strache.

“If someone insults a country, then the prime minister of that country cannot support his candidacy . . . We will keep looking for a suitable candidate,” he added.

Mr Weber, who told German television in March that he “would not accept the post” of commission president if he had to depend on Fidesz votes, said on Tuesday that Hungary was “going in the wrong direction” under Mr Orban.

“The European People’s Party is a party of values, of common ideals, of an idea for the future of Europe and that is what brings us together, and those who don’t believe anymore in these values have to leave the EPP,” he told the AFP news agency.

In talks with Mr Strache and with Italy’s nationalist deputy prime minister Matteo Salvini last Thursday, Mr Orban said he wanted the EPP to move further to the right rather than making any concessions towards liberals whom he accuses of endangering Europe by encouraging mass immigration.

“With his behaviour in the last few days and the meeting with [Mr Salvini] he has given a clear sign that he will leave [the EPP],” Annegret Kramp-Karrenbauer, the leader of Germany’s ruling Christian Democrats, said on Monday evening.

Mr Orban said he and Mr Salvini would decide on concrete forms of co-operation after the European elections, and Fidesz is confident that the EPP is too eager for the seats that it will deliver to expel it before the ballot.

“I do not believe in co-operation with parties like Le Pen and the AfD who want to leave the EU,” Austrian chancellor Sebastian Kurz, an influential figure in the EPP, said last Friday. His conservative People’s Party has governed with Mr Strache’s Freedom Party since late 2017.

Mr Orban is expected in Washington next Monday to meet US president Donald Trump, with whom he says he shares a “spiritual community”.