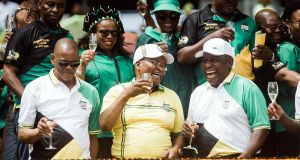 South Africa’s ruling party has come out strongly in defence of its secretary general, Ace Magashule, after he was accused in a newly released book of looting the Free State provincial government’s coffers for nearly a decade.

Extracts from Gangster State: Unravelling Ace Magashule’s Web of Capture published by two Sunday newspapers claim the senior African National Congress party leader was notorious for demanding kickbacks when premier of the rural province, from 2009 until 2018.

The book, written by investigative journalist Pieter-Louis Myburgh, details how Mr Magashule was widely known as “Mr Ten Percent” because he wanted a 10 per cent cut of every contract issued by the provincial government during his tenure as premier.

In addition, it goes on to describe how Mr Magashule was an “enabler” of numerous dodgy deals in South Africa involving the controversial Gupta brothers, Ajay, Atul, and Rajesh – businessmen who stand accused of also having a corrupt relationship with former president Jacob Zuma.

Mr Magashule was elected secretary general of the ANC in December 2017 and is seen as the highest-placed member of a group of comrades in the ruling party who remain loyal to Mr Zuma, who was ousted from power in February 2018.

With less than six weeks to go to the country’s crucial general election, the revelations are a blow to the ANC’s re-election campaign, which is partly rooted in a promise to clean up corruption in its ranks and in government.

Opposition parties have called for the ANC to act against Mr Magashule, given the severity of the allegations made against him and its promise to act against the corrupt, but instead the ruling party has come out in his defence.

On Sunday evening ANC spokesman Dakota Legoete attacked the credibility of allegations made against Mr Magashule, labelling them “fake news” and “lies” that are designed to damage the ANC in the weeks leading up to the national poll on May 8th.

“These fake news stories, and the dubious book that they are based on, are timed for publication barely a month before our national elections in order to try and inflict the maximum damage against the secretary general of the ANC,” he said.

Mr Magashule has also said the ruling party would not be deterred by “gutter journalism” and on Monday he told reporters he was considering his legal options following the book’s publication.

However, Mr Myburgh has responded that he is in possession of numerous documents that will substantiate the damning allegations linking Mr Magushule to business people involved in tender fraud with the Free State government.

To add to the bad news undermining the ANC’s election campaign, former South African president Kgalema Motlanthe said in a radio interview at the weekend that although he thought the ANC would win the general election, its margin of victory would be slim.

“I think they [the ANC] will still emerge victorious [on May 8th], though with a far, far, far much-reduced majority than was the case before,” the ANC stalwart said on SAfm radio.