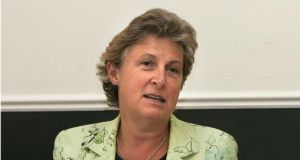 Gisela Stuart: Vote Leave, which she co-chaired and was supported by Boris Johnson and Michael Gove, has withdrawn an appeal against fines for breaches of electoral law. Photograph: Dara Mac Dónaill

A key Vote Leave figure has sidestepped calls to apologise for the campaign breaking the law over its spending during the EU referendum.

Ms Stuart also said the referendum rules should be clearer, adding the legislation and interpretation of the law needed rewriting.

The Electoral Commission confirmed last week that Vote Leave, which was supported by senior politicians including Boris Johnson and Michael Gove, had withdrawn an appeal against fines for breaches of electoral law committed during the 2016 EU referendum campaign.

The watchdog’s investigation centred on a donation of almost £680,000 made by Vote Leave to BeLeave, a youth Brexit group.

After Vote Leave announced it was dropping its appeal, the Electoral Commission said it had taken a case because of the need to ensure “fairness, confidence and legitimacy” of the voting process.

“Serious offences such as these undermine public confidence in our system and it is vital, therefore, that they are properly investigated and sanctioned. We have been advised that Vote Leave has paid its £61,000 fine and look forward to receiving the sum in full.”

“The one thing we do know, all these people have access to considerable amounts of money, so to say they are dropping it for lack of funds is absolutely ludicrous,” she said. “Johnson and Gove should be providing a full and proper explanation to the British people following the dropping of this appeal.” She added she expected to one day see a “public inquiry into what happened and how we got into this terrible mess”.

Asked why Vote Leave dropped its appeal, Ms Stuart told the BBC One Andrew Marr Show: “I think what it shows is we have been outspent at every stage of this process – whether it was before the referendum started and the government spent £9.4 million on a leaflet, during the campaign . . . collectively the Remain side spent more, and going to appeals costs money too.”

On whether she would apologise for the organisation breaking the law, Ms Stuart replied: “It was in relation of one particular donation where the Electoral Commission interpreted the rules as that being acting in concert, which we had got legal advice which said it wasn’t.

“So the key question is if anybody wants a second referendum then the referendum legislation as it stands, and the way the Electoral Commission and Information Commissioner interprets them, needs rewriting.”

Ms Stuart, asked whether Vote Leave stood by its previous statement to rubbish the claims against it, later said: “Our biggest problem in the end was that we destroyed all our data, and therefore some of the evidential basis which people are asking for.

“All I can tell you is that at every stage, in terms of the processes, we did our level best to be in compliance with the rules.

“If they were interpreted afterwards in a way which was different from the advice we got at that time, then so be it. The regulator always has the final word.”

Pressed if she would apologise on behalf of the campaign, Ms Stuart replied: “At every stage we were ruled compliant according to legal advice we were given at that time.

“If money was the question, Remain spent by far more money than Leave did, the government spent more money on the campaign than we did.

“Do not say this was a question of money. This is why I say the rules should have been much clearer.

“We had a compliance committee, our legal advice was always that that was the right thing to do.