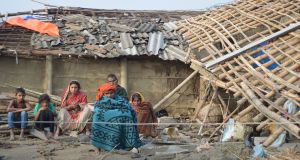 A Nepali family sits in front of their damaged home in Nepal’s southern Bara district near Birgunj on April 1st, 2019, the morning after a rare spring storm. Photograph: Diwakar Bhandari/AFP/Getty

Rescuers struggled Monday to reach villages in southern Nepal cut off by a powerful rainstorm that killed at least 28 people and injured hundreds more.

High winds during the storm Sunday night flipped cars and blew a bus carrying at least 40 people off a road.

Police said most of the deaths were caused by collapsing walls and falling bricks in homes and toppled trees and electricity poles.

The storm swept through villages in a farming region in Bara and Parsa districts.

The government administrator in Bara, Rajesh Poudel, said Monday that 27 were killed there. One person died in neighbouring Parsa, administrator Narayan Bhattarai said.

Prime Minister Khadga Prasad Oli cancelled a visit to western Nepal and was flying to the area to observe rescue efforts, his office said.

The National Emergency Operation Centre in Kathmandu said 612 people were injured and teams with tents and other material were sent to the area.

Villagers gathered what they could salvage from what was left of their homes in Bharwalia village, where most people live in huts made of mud and bricks with straw and stone roofs.

Most of the huts were blown down by the strong winds, leaving people without shelter or food.

“The storm took everything we had, including all the goods we had. We have no food to eat or any roof over our heads,” said Jebeda Khatung, who was digging through the debris in hopes of finding some of her belongings.

The weather was clearer Monday, and helicopters were expected to begin taking the injured to medical facilities.

Local television showed the injured being taken to a hospital in cars, ambulances and even on motorcycles, but roads in many villages were blocked by fallen trees and electricity poles. – AP