Outage comes amid tensions with US after Russian ‘cybersecurity personnel’ arrive 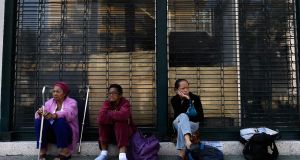 Patients on dialysis wait at a closed clinic during a power outage in Caracas. Photograph: by Federico Parra/AFP/Getty Images

Venezuela’s government told workers and school children to stay home on Tuesday as the second major blackout this month left the streets of Caracas mostly empty and residents wondering how long power would be out amid a deepening economic crisis.

President Nicolás Maduro’s government, which had blamed sabotage by the US and the opposition for the previous power cut, said an “attack” on its electrical system caused the blackout that first hit on Monday.

Intermittent service has long affected Venezuela’s largely rural interior, but residents of Caracas fear the increasing blackouts in the capital mean that unreliable power is becoming the new normal for them, too.

“I hope that now with these blackouts in Caracas they can do something, that everyone reacts,” said Maria Melendez, a seamstress in the western city of Punto Fijo who said she has had to replace appliances damaged during previous blackouts.

The blackout came amid tensions with the US over the weekend arrival of Russian military planes, which led Washington to accuse Moscow of “reckless escalation” of the country’s political crisis.

The US believes the planes were carrying “cybersecurity personnel,” a US official said on Tuesday. That would suggest part of their mission could be helping Mr Maduro’s loyalists with surveillance and protecting the government’s cyber infrastructure.

Russia, which has major energy investments in OPEC member Venezuela, has remained a staunch ally of Mr Maduro, while the US and most other Western nations have endorsed opposition leader Juan Guaidó.

Citing the constitution, Mr Guaidó in January assumed the interim presidency, saying Mr Maduro’s re-election last year was fraudulent. Mr Maduro says Guaidó is a US puppet attempting to lead a coup against him and has blamed worsening economic difficulties on sanctions imposed by Washington.

No power, no internet

Power had returned to many parts of Caracas by noon on Tuesday, but businesses remained idle and few pedestrians were walking the streets. Those who went to work because they had not heard that the workday had been cancelled were returning to their homes.

“How am I supposed to find out, if there’s no power and no internet?” said dental assistant Yolanda Gonzalez, 50, waiting for the bus near a Caracas plaza. “Power’s going to get worse, you’ll see.”

Venezuela’s western cities, including Maracaibo and Barquisimeto, as well as the central city of Valencia, also had no power on Tuesday, according to witnesses.

The main oil export terminal of José and the country’s four upgraders that make its crude exportable were paralysed by the outage, industry workers said.

Information minister Jorge Rodríguez on Monday said the blackout was the result of an attack on Venezuela’s main hydroelectric Guri dam which had affected three major transmission lines.

He did not explicitly blame the outage on any particular individual or group. But he said, “the intention of Venezuela’s far right is to attack, generate anxiety and anguish, in order to seize power and steal all our resources.”

Brazil mines and energy minister Bento Albuquerque said on Tuesday that Venezuela had not complied with its contract to supply northern Roraima state with energy since March 7th, without providing details.

The first of Venezuela’s blackouts this month began on March 7th. For nearly a week it left millions of people struggling to obtain food and water and hospitals without power to treat the sick. Looting in the western state of Zulia destroyed hundreds of businesses.

Electricity experts say the outages are the result of inadequate maintenance and incompetent management of the power grid since the late president Hugo Chávez nationalised the sector in 2007.

“The new normal for the electrical supply is greater vulnerability and less reliability,” said Miguel Lara, a former president of the state-run entity responsible for the power system. – Reuters