Young people with disabilities are ‘being trapped in nursing homes’ 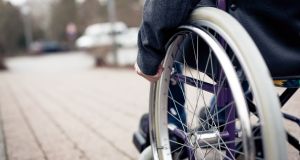 Young people with disabilities are getting “trapped” in nursing homes due to a shortage of personal assistants (PAs), in a clear infringement of their rights, the Disability Federation of Ireland has warned.

Among them is Elizabeth Halton (48) who is wheelchair-bound and has a speech impairment, but who has lived independently all her adult life, until 15 months ago.

Having lost her PA hours, she is now in a nursing home in Trim, Co Meath. She is “lonely and very depressed” and wants to “go back to my flat”.

Originally from Tierworker, Co Meath, Ms Halton has Friedreich’s ataxia, a condition that causes progressive damage to the nervous system.

In 2009, following the death of her sister, she moved to Navan to be closer to her family. She lived independently in an apartment provided by Cheshire Homes – a charity supporting people with disabilities – and her PA hours continued to be funded by Dublin.

In March 2017, however, she went into the nursing home in Trim, which she had done before, for respite care but became ill and stayed longer than she expected. While there, her Dublin-funded PA hours were withdrawn.

The HSE in Meath could provide just 12 hours a week, meaning she could not return to her apartment, which Cheshire Homes has had to re-let as it cannot keep apartments empty under its funding arrangements.

“I didn’t think I was going to end up here full-time,” said Ms Halton. “I want to go back to my flat. I am lonely and very depressed here. It is not the right environment for me. I am a young woman.” She said she missed going to the cinema and out for lunch, which she could do if she had her PA hours back.

She feels she is “in prison” and cannot leave the premises for more than a few hours at a time.

“I just need some help, but the HSE won’t let me. It’s unfair.” Asked how she would feel if she has to remain in the home much longer, she said: “Terrified.”

Access to a PA service is regarded as essential to people with disabilities living fulfilled lives, and to Government meeting its international human rights obligations, particularly under the United Nations Convention on the Rights of Persons with Disabilities (UNCPRD) which Ireland ratified last March.

Article 19 of the convention says signatories will “recognise the equal right of all persons with disabilities to live in the community, with choices equal to others, and shall take effective and appropriate measures to facilitate full enjoyment by persons with disabilities of this right and their full inclusion and participation in the community”.

“Given the move away from congregated settings towards community living it is believed the demand for PA and support services will increase significantly over time.”

The Disability Federation of Ireland, however, disputed the HSE figures, saying they are “not reliable due to inconsistent applications of definitions and level of validation for the actual service provided”.

“There is a huge need for reliable data, a need in the context of huge anecdotal evidence of unmet need for PA hours. We know of people on waiting lists for over five years.

“Our experience is that no one gets a PA allocation in any region until someone dies, allowing reallocation of their hours.”