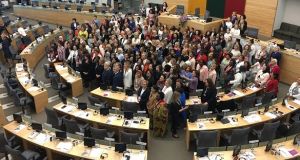 The key to future prosperity is attracting girls and women into careers in the digital area and also into science, technology, engineering and maths, the head of the EU body for gender equality has said.

Virginija Langbakk, director of the European Institute for Gender Equality, was speaking to The Irish Times at the Women Political Leaders (WPL) summit in Vilnius, Lithuania, on Thursday.

Ms Langbakk, whose second term in office comes to an end next year, said women in the EU performed better than boys in tertiary education, but they chose jobs which were not so much in demand and were lower paid.

If we wanted to close the gaps in a high-skilled labour force and also to have prosperity and GDP growth, the only option was to attract women in the digital sector and into science, technology, engineering and maths, she said.

More than 250 female heads of state and government, ministers, and parliamentarians from all over the world are attending the event on Thursday and Friday at the Seimas, the parliament of Lithuania.

The parliament co-hosted the event with Lithuanian president Dalia Grybauskaité and in co-operation with the Council of Women World Leaders.

The Vilnius venue was chosen to coincide with Lithuania’s year-long national celebrations of 100 years of independence and of women’s voting rights in the country.

Fine Gael TD Marcella Corcoran Kennedy, who participated in a panel discussion on embracing new technologies, said the Irish Government believed continued engagement with citizens was “essential” because a person’s vote was their voice.

She highlighted the Constitutional Convention and the Citizens’ Assembly as successful examples of such engagement.

Ms Corcoran Kennedy, vice-chairwoman of the newly established Women’s Caucus, said it was also important to make information available online to counteract “negativity” and a lack of accuracy.

She said technology had been liberating for people in terms of access to politicians. But she added the challenge was coping with the freedom that also gave the citizen to “say what they like about me on my Facebook page”. This could be quite a challenge for public representatives.

Helen Clark, former prime minister of New Zealand and administrator of the United Nations Development Programme, said potential political leaders had to embrace new technologies as an enormously important way of mobilising around issues and causes.

She said that if an up-and-coming political leader did not recognise the potential of social media platforms such as Facebook and Twitter, they were not going to be “in the game at all”.

Using these platforms opened up so many opportunities to reach much wider audiences more quickly than was ever possible before, she added.

Ms Clark said there were people who would troll politicians’ social media platforms and her advice was to “get rid of them” and use their mute and block buttons.

In a video message, UN secretary general António Guterres said gender equality was a matter of human rights and was also essential for peace and prosperity.

He said we still lived in a male dominated world, with a male-dominated culture and we needed more women decision makers.

Viktoras Pranckietis, speaker of Seimas, said engaging men and women in the decision-making process was “a precondition for democracy”.

SIlvana Koch-Mehrin, president of WPL, said UN research showed it would take 100 years for there to be as many women political leaders as there were men. But she said another century until the achievement of parity was unacceptable.

More than 70 countries were represented at the event, with in excess of 50 speakers.