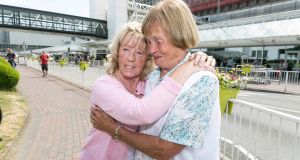 Magdalene survivors Breda Duffy and Martha Osmond, who were together in the Limerick Magdalene laundry. Photograph: Paul Sherwood

Hundreds of Magdalene women from Ireland, including those who have been living abroad, are taking part in an historic two-day event in Dublin on Tuesday and Wednesday.

For many, it will be the first time that they will be able to speak freely to other women incarcerated in the laundries.

The event is being organised by Dublin Honours Magdalenes (DHM), a voluntary group which has come together with entrepreneur Norah Casey to honour the women.

The event will fulfil two key aspects of the Magdalene Restorative Justice Scheme: to bring together those women who wish to meet others who also spent time in the laundries; and to provide an opportunity for a listening exercise to gather views on how the laundries should be remembered by future generations.

The event is being supported by Minister for Justice and Equality Charlie Flanagan, whose department issued the invitations to Magdalene women on behalf of DHM and Lord Mayor of Dublin Mícheál MacDonncha.

Both the Minister and Dublin City Councillors have provided financial support for the occasion.

President of Ireland Michael D Higgins and his wife, Sabina, will host a reception on Tuesday afternoon which will be followed by a gala dinner at the Mansion House in Dublin.

On Wednesday morning at the Mansion House the women will be invited to share their views and thoughts on the legacy of the laundries.

The exercise will be facilitated by the UCD Magdalene Oral History project, and will be conducted in a way that respects the women’s privacy. Afterwards views gathered will be anonymised and made freely available online to the public.

DHM is providing all accommodation for the women in Dublin for the two nights and transport to and from all events.

Ms Casey said: “It is a privilege to be part of this long-awaited gathering of these amazing women and we hope that the whole country will join with us in honouring and welcoming them to this very special event.”

Claire McGettrick of DHM said: “There will naturally be a lot of media interest in this event as it is the first time that women who worked at the Magdalene laundries have been invited to meet together. However, for those who have any concerns about their personal privacy, there will be secure arrangements put in place; measures to ensure that they are protected from the media spotlight.”

Maeve O’Rourke of the Irish Council for Civil Liberties and one of the DHM organising committee noted that when he made his recommendations about what the Magdalene Restorative Justice Scheme should involve, Mr Justice John Quirke recognised that redress comes in many different forms.

She said that after the then taoiseach Enda Kenny’s apology to the women in 2013, Mr Justice Quirke’s team spoke to more than 300 Magdalene survivors.