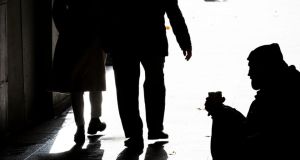 The deaths bring to over 50 the number of homeless people who have died so far this year, compared to a total of 37 at this point in 2019, according to chief executive of the Inner City Helping Homeless charity, independent councillor Anthony Flynn. File photograph: Tom Honan/The Irish Times

A young mother was one of two homeless people who were found dead in Dublin over the bank holiday weekend.

The woman (31) is thought to have been dead a number of days when her body was found in a tent at Lynch’s Lane in Clondalkin, in the early hours of Saturday, October 24th.

Gardaí said: “It is believed that this lady died between 21st October, and 24th October. A post mortem has been carried out and a file is being prepared for the coroners court.”

She was the mother of four young children. A spokeswoman for the Dublin Region Homeless Executive (DRHE) said she had been known to the homeless services but had not been engaging with services for the past year.

In the city centre, the body of a man in his 40s was discovered at about 5.40 am on Friday, 23rd October. “His body has since been removed to the city mortuary where a postmortem is due to take place, the results of which will determine the course of the investigation,” said a Garda spokesman.

The deaths bring to over 50 the number of homeless people who have died so far this year, compared to a total of 37 at this point in 2019, according to chief executive of the Inner City Helping Homeless charity, independent councillor Anthony Flynn.

“Being honest we are not seeing the true extent of the homeless levels around Dublin and the rest of the country. As of Monday night there were 133 homeless in Dublin and we are not even seeing the full extent of what is happening,” said Cllr Flynn.

Many homeless people, particularly those recovering from addiction and those new to homelessness, did not feel safe in hostels, he said.

News of the deaths emerged on Wednesday as Dublin City Council published its homeless cold weather strategy. It will include 340 new emergency beds for single people, increased staffing for the rough-sleeper outreach team and increased “contingency” capacity for families.

Speaking at the publication of the strategy, Lord Mayor, councillor Hazel Chu, said she was “very saddened” to hear of the two recent deaths.

“As we face into the winter months I am very mindful that the hardship of being homeless becomes even more acute and we have to ensure that all possible supports are available during the next few months.

“I welcome the additional emergency accommodation that the DRHE will activate over the coming months and it is essential that all the relevant social and care supports are also available to all who may experience homelessness in Dublin. The complexity and uncertainty surrounding Covid-19 will be a continuous and difficult challenge during this period.”