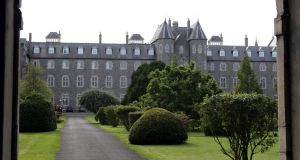 Prisoners at Mountjoy Prison have been granted online access to college lectures and tutorials during the coronavirus pandemic and this could be instrumental in establishing third-level education in Irish prisons in the longer term, a review of a new project involving the Dublin jail and Maynooth University has concluded.

The access to courses at Maynooth granted to prisoners could “bring the university into the prison and the prison into the university in ways we could never have previously imagined”, a review of the scheme by Sarah Meaney of the College Connect programme, which aims to increase diversity, in third level has found.

It concluded the project resulted in the prisoners reflecting on their lives in a meaningful way and also made third-level education seem more attainable for them as they learned the college students were often from similar backgrounds as themselves.

“One of the key barriers for young working-class men to educational progression, is a lack of confidence that university life is for them,” Ms Meaney concluded in her review.

“With accents, clothing and lifestyles that may differ from their middle-class peers, it can be hard to imagine fitting in.”

This was compounded for prisoners, as there was often “demonisation” of them “by the Irish media, fuelled by the use of language such as ‘animals’ and ‘thugs’”.

Assistant governor at Mountjoy Prison, Donnacha Walsh, told The Irish Times that following the completion of a 13-week programme during which Maynooth students went into Mountjoy to join prisoners on a course on the prison campus, a “partnership” had now been entered into between the jail and the university.

“We are looking at getting [prisoners] from our education units in the prisons to go to Maynooth University and study as mature students,” he said, adding this was the first scheme of its kind in the Republic.

Mr Walsh said Mountjoy Prison had already made overtures to other Irish universities and technical colleges, including in Cork and Limerick, to facilitate prisoners joining degree courses while they were still serving their sentences.

He made his remarks ahead of the release of a new report on the Story Exchange project over 13 weeks from late last year to mid March during which Maynooth University students went into Mountjoy Prison once each week and were paired with young prisoners serving sentences. The project formed part of the work the prisoner group was doing towards attaining a Gaisce award.

Each prisoner was paired with a student and they each had to explain an event in their life based on a theme selected the week before. Once they had told each other their stories, all the participants gathered in a 17-member group and the stories were relayed to the group; the prisoner telling the student’s story and the student telling the prisoner’s story.

The technique was developed in the United States, where the New York Police Department has used it to engage with teenagers from urban areas to challenge the assumptions that both the police officers and young people had about each other.

The prisoners who took part in the project are incarcerated in the Mountjoy Prison Progression Unit, formerly St Patrick’s Institution for Young Offenders. The students all entered Maynooth University through an “access programme” and many had attended Deis schools, in disadvantaged areas, before entering university.