A quarter of undocumented migrants earn below minimum wage – study 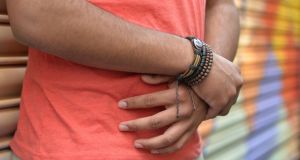 File photograph of an undocumented migrant in front of the mural at the Migrant Rights Centre. Photograph: Sara Freund / The Irish Times

More than a quarter of undocumented migrants working in Ireland earn below the minimum wage while nearly half are working more than 40 hours a week, according to new research from the Migrant Rights Centre Ireland (MRCI).

The study, led by the Justice for the Undocumented group, found 93 per cent of undocumented people are working to support themselves and their families while more than three-quarters have been living in Ireland for more than five years.

The survey of more than a thousand undocumented people living in Ireland, published on Thursday, also found more than a quarter of respondents work as carers for elderly people and one-fifth work in restaurants or catering.

Undocumented workers “stepped up” during the pandemic and “continue to work providing essential services throughout Covid-19”, said JFU chair Tjanasi Jack. She described as “unacceptable” the study’s finding that over a quarter of those surveyed were not receiving the minimum wage and thus faced “high levels of exploitation”.

MRCI has been calling for years on the Government to introduce a pathway to residency for undocumented people working in Ireland, particularly children who have spent most of their lives in this country. A 2019 MRCI report found seven out of 10 undocumented children had been born in Ireland and warned that many young people were finding it difficult to move onto third-level education, primarily for financial reasons but also because they do not want to declare their status.

In June, the Government committed to creating “new pathways for long-term undocumented people and their dependents” to regularise their status.

Regularisation will “transform people’s lives, allowing them to live safely and securely and to thrive in the country we call home,” says the report, adding that the regularisation scheme should be “broad and inclusive for workers, children and families”.

Ms Jack said the research further underlines the role the undocumented play in Irish society. “We are your friends, your neighbours and your co-workers,” she said. “We need a clear and fair solution.”

MRCI campaign worker Neil Bruton added that pathways to papers for the undocumented had become commonplace across the EU and reiterated the call for a “broad and inclusive” scheme “so that people can live safely and securely and thrive in their home”.