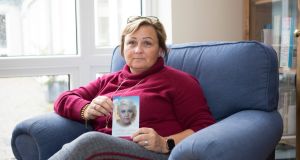 A car crash, the impact of which resulted in Hollie being thrown out of the vehicle’s rear window, had a huge effect on her mental well-being, she says.

“The car crashed and Hollie went out the back window... and that started Hollies’s panic, anxiety and depression and it went from there,” she says. “That subsequently developed into a mood disorder, but she could function and held down a job and bought a house.”

Ms Walsh says her daughter got by “perfectly up until the last two years of her life when she was getting older, and she wasn’t managing stress as well”.

Ms Gilson (26) died on May 17th, 2017 following a drug overdose. This came after four suicide attempts since Christmas 2016, including an overdose in April 2017 where she was initially treated in South Tipperary General Hospital before spending a week in the psychiatric unit at St Luke’s Hospital in Kilkenny.

Ms Walsh says her daughter was discharged in mid-April 2017 without any support.

A letter that Ms Gilson sent to the psychiatrist treating her at St Lukes in April 2017, Ms Walsh says, clearly shows that her daughter was aware of her problems – diagnosed as borderline personality disorder (BPD), post-traumatic stress disorder (PTSD) and depression – and wanted help.

“I am not ready to go home. I came in for help,” Ms Gilson wrote. “All I want to do is [live] day-to-day life for once and not go around feeling pissed off with constant thoughts of self-harm. I’ve been struggling for years in and out of hospitals that aren’t helping me. I am going around and around in circles.”

Ms Gilson said that she always felt as if she was “on the edge”.

“It takes me three hours to get out of bed. I don’t want to go anywhere, do anything or socialise with my friends. I want some sort of life back.

“I need somebody to help me please. I’m afraid that if I don’t get the help I need, it won’t be long ’til I’m gone for good ’cos the thoughts will eventually devour and take me over. I don’t care how long I need to stay to change the meds as long as there is some light at the end of the tunnel.

“I know have I have BPD and suffer with anxiety and I suffer with PTSD and it’s not easy but I am aware of them and I know they won’t go away. If I’m released what supports will I get in the community?”

Ms Walsh believes the mental health system failed to provide the necessary supports for Ms Gilson when she again overdosed on May 13th and was hospitalised for two days before being discharged. She was admitted to South Tipperary General Hospital after overdosing on the painkiller, which was taken within an hour of her discharge from the hospital on May 15th.

“Every time Hollie got stressed in the last six months, she would reach for the tablets and overdose. It was impulsive, a cry for help and every time she took the tablets, she would ring us and we would get her to hospital,” Ms Walsh says.