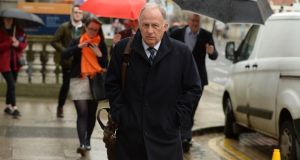 Scouting Ireland criticised the State child and family agency Tusla as “totally incompetent and unprofessional” in private correspondence to Minister for Children Katherine Zappone’s officials, after the agency raised child protection concerns with the youth organisation.

In February, Tusla wrote to Scouting Ireland expressing concerns over supervision standards on overnight camps. The letter threw the youth organisation into the centre of fresh controversy after it was made public by Ms Zappone.

The details of Mr Elliott’s correspondence, released to The Irish Times under the Freedom of Information Act, will likely heighten tensions between Tusla and the youth organisation.

Scouting Ireland officials had refrained from openly criticising Tusla during the controversy, while defending standards in the organisation.

“It is alarming to me that Tusla appears not to be able to recognise and distinguish between good and bad practice,” Mr Elliott said.

On foot of Mr Elliott’s email, sent on February 26th, Ms Zappone sought a copy of Tusla’s letter, which she received the next day, and then later read it out in the Dáil.

Mr Elliott wrote that he would be seeking to have Tusla’s letter withdrawn, and if that did not happen “we will be forced to place on record our response . . . which can only reflect very badly on Tusla”.

Tusla had criticised the potential conflict of interest in Scouting Ireland running its own helpline for past abuse survivors, after a complaint had been received about the treatment of one caller.

Tusla had accepted this complaint “without any reference to ourselves”, Mr Elliott’s email said. “The possibility that it was malicious and involving individuals from within SI [Scouting Ireland], who are currently under pressure and unhappy with the positive changes that are taking place, does not appear to have occurred to them,” he said.

Donegal garda ‘shocked’ at spike in drink- and drug-driving during lockdown 02:33
Covid trauma expected to increase demand for mental health services 02:10
Travel rules unlikely to include mandatory quarantine or cancelled flights 00:25
Warnings over theft and scams after fourfold rise in puppy prices 00:01
Dessie O’Hare to appeal sentence for falsely imprisoning family in Dublin 23:17