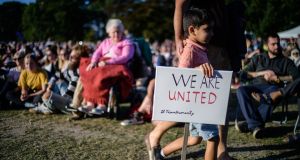 A vigil held in memory of the mosque murder victims in Christchurch. Photograph: Anthony Wallace/AFP/Getty Images

It has been said that God comes to us each day disguised as life. This suggests that God is not some kind of extra to what is going on in our lives but is ever present and active. It implies that God cannot be confined to some religious sanctuary where strange things happen. Such thinking has placed God beyond the reach of many ordinary people who have simply walked away.

The Christian view is that God is not only to be found on the margins of human experience but in everyday things, sacred and secular. The saintly 17th-century hymn writer George Herbert saw an awareness of this as an important aspect of spirituality: “Teach me my God and King in all things thee to see; and what I do in anything to do it as for thee.”

Tomorrow’s readings speak of an “out and about God”, engaging with people. The Old Testament reading speaks of God coming to the rescue in times of trouble and distress.

Isaiah’s readers were familiar with hostile desert conditions and he uses the image to describe the feelings of those who find life difficult. He says that even though we may feel we are in a bad place, a place seemingly without resources, God makes a way out of no way: “I will make a way in the wilderness and rivers in the desert . . . for I give water in the wilderness, rivers in the desert, to give drink to my chosen people.”

The psalm goes further: “Those who sow in tears shall reap with songs of joy. Those who go out weeping, bearing the seed, will come back with shouts of joy.”

While this is the expectation of our faith it is not easy to accept in times of grief or trouble.

Those who suffered in the recent atrocity in New Zealand will struggle to believe that their tears could ever be replaced by songs of joy. Yet signs of hope were quickly seen there: the evil could not eclipse the good shown by the nation as 20,000 gathered for a memorial service led by the prime minister.

The hate was repudiated; women of all faiths wore headscarves in solidarity with Muslim neighbours; tough rugby players formed circles before their games, some in tears, to honour the victims.

Christians believe that God was present in the love and sympathy shown by those people; angels in tracksuits and jeans and rugby kits, not all of them churchgoers. The light shone in the darkness and the darkness could not overcome it.

William Barclay in his commentary on St Matthew’s Gospel suggests that the way to know God is not by mental search, but by giving attention to Jesus Christ. “The search for God can end in the contemplation of Jesus Christ, for in him we see what God is like.”

In the epistle reading, St Paul, who was confronted by the “out and about God” on a public road, the road to Damascus, declares that the things he once treasured were of little value when compared with the hope that God had given him in the person of Jesus Christ: “Yet whatever gains I had, these I have come to regard as loss because of Christ. More than that, I regard everything as loss because of the surpassing value of knowing Christ Jesus my Lord.”

To know the Christ of Holy Week and Easter in the way that St Paul did provides hope in a world, however dark it may seem.

In the gospel we read how Mary poured precious ointment over the feet of Jesus. It is seen as an anointing of Jesus, an anticipation of his death. But note the setting: a house in Bethany and a shared meal. The hosts Mary and Martha, two sisters who argued about sharing the housework and who had previously criticised Jesus because he was slow to respond to their call when Lazarus was ill.

It was a place where human frailties were on display, and God was there too – disguised as life.