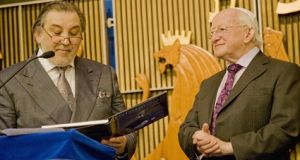 Last week’s commemoration at the Yad Vashem memorial in Jerusalem of the liberation of the Nazi death camp at Auschwitz 75 years ago was “ a truly remarkable achievement,” the chair of the Jewish Representative Council of Ireland has said.

Maurice Cohen told The Irish Times it was such an achievement on the part of organisers “to get so many together to remember the end of a premeditated slaughter of human beings, mostly Jews, and to say ‘Never Again’.”

The event was “hosted by Israeli president Reubin Rivlin and attended by almost 50 Heads of State including president Putin of Russia, president Macron of France, president Steinmeier of Germany, Britain’s prince Charles and many others,” he said.

“All heads of State gathered the previous evening for dinner as guests of President Rivlin at his home for an historic informal evening. The event was also attended by many survivors and their families,” he said.

US vice-president Mike Pence and Donald Trump’s son-in-law Jared Kushner, who oversees US policy on Israel-Palestine, were also in attendance.

He travels to Kraków in Poland on Monday where he will attend 75th anniversary commemoration of the liberation of Auschwitz-Birkenau by Soviet troops and on Tuesday he will visit the Jewish centres of Kazimierz and Podgórze in Kraków before returning to Ireland.

Earlier this month, Ireland attended a meeting in Brussels of the International Holocaust Remembrance Alliance which universally adopted a declaration honouring the victims of the Holocaust and committed to a world without genocide.

Auschwitz was Nazi Germany’s most notorious extermination camp. An estimated 1.1 million Jewish adults and children, over 200,000 Poles, Roma, Soviet prisoners, and homosexuals were killed there between 1940 and 1945.