A Labour voter, Sue Redmond is thinking of switching to Sinn Féin due to pension reform 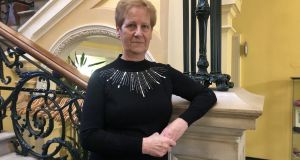 Sue Redmond: “I worked all my life. I paid in my PRSI, all my taxes. I didn’t ask to leave the job.” Photograph: Simon Carswell

Sue Redmond spent her working life in Tallaght hospital but when she turned 65 she had to apply for social welfare to tide her over until her State pension kicked in at 66.

The State pension age rose to 66 in 2014 leaving Ms Redmond and people in her situation having to apply for jobseekers’ benefit to make ends meet until the pension payments came.

“I found it very humiliating, horrible. You have to fill out loads of forms, pretend you were looking for work. If you didn’t say you were interested in another job, you were told your claim wasn’t processed,” she told The Irish Times.

Ms Redmond, a mother of three and grandmother of five, started working at the age of 14 and retired in May 2017. She had to claim jobseekers’ benefit for about a year and even had to attend jobs fairs and pretend she was interested in jobs she had no intention of applying for.

After retiring, the west Dublin woman hated dropping into her local social welfare office to pick up her allowance until she started receiving her pension in 2018.

“They are actually looking down their nose at you, like you shouldn’t be here. That is the feeling that you get,” she said.

“I worked all my life. I paid in my PRSI, all my taxes. I didn’t ask to leave the job. My contract stated I had to go at 65. I didn’t mind going but to go and have to be humiliated for a year. It was just horrible.”

Ms Redmond used to vote Labour in general elections but will no longer support the party over the past changes to the State pension age. She is leaning towards Sinn Féin this time.

“I will be voting for the party that will bring the pension age back to 65 and stop it moving to 67 completely,” she said.

“I feel very strongly on this.”