‘He was a brilliant photographer, very successful, and he loved chasing newspaper stories around the country’ 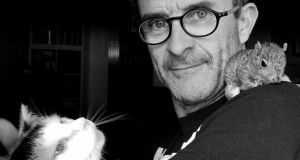 Kevin Clancy with his pets at his home. Photograph: Johnny Bambury

Tributes have been paid to pioneering Irish press photographer Kevin Clancy who died on Wednesday, following a short illness.

Clancy, originally from Mayorstone, Limerick, and who worked for various news and public relations agencies, died at Bon Secours Hospital, Cork, surrounded by his wife Liza and siblings Michael, Kieran, Catherine and John.

Afterwards he set up his own photography business in Galway and the midlands before he relocated to Killorglin where he diversified into driving tour buses across Co Kerry and beyond, while continuing to take photos of major athletics events.

Paying tribute to him, friend and colleague Johnny Bambury said: “He was a brilliant photographer, very successful, and he loved chasing newspaper stories around the country.”

Clancy is regarded among colleagues as having been one of the first to go digital when others were still ferrying their rolls of film from the regions on trains and in cars to newspaper picture desks in the capital.

“It was a lot of fun and very exciting. He was the first photographer, I think, to go digital, and the first I knew of to buy a digital camera. He was always way ahead of the rest of us in technology,” said Bambury.

“He was a fascinating character. He has gone far too young. I miss him so much already, I always will. He was absolutely mad, great craic, full of devilment,” he added.

Clancy’s brother Kieran, a retired Irish Examiner photojournalist, said: “Kevin was an accomplished photographer, he was very good technically and had a real flair using colour. He also loved athletes and had attended four or five Olympic Games.”

“He used to run up and down Croagh Patrick in Mayo, he literally would run back down the mountain without stopping,” he recalled.

Kevin Clancy’s former boss at Press 22 and close friend Noel Gavin, said: “He was eccentric, funny, and the best friend one could have. He was a good head, a brilliant photographer, and, a very generous guy.”

Limerick photographer Liam Burke added: “Kevin worked with me in the 1980s and early 1990s, and he was very popular, a really nice guy. His father worked for the national newspapers, as did his brother Kieran. He was a happy-go-lucky guy, very personable, he radiated goodness and he was a great communicator.”

According to a funeral notice on rip.ie, Mr Clancy’s remains will lie in repose in Cork, “at the Wilton Funeral Home, Sarsfield Road of Jerh. O’ Connor Ltd. Gathering of family and friends on Saturday at 11am until 1pm”.

1 What evidence is there that the IRA still controls Sinn Féin?
2 Brazilian father to be deported days after daughter’s birthday
3 Coronavirus: Austria stops train services with Italy to contain spread
4 Clare houses surrounded by water evacuated as rainfall warning
5 Maureen Dowd: For the White House parasite, all restraint has gone
Real news has value SUBSCRIBE