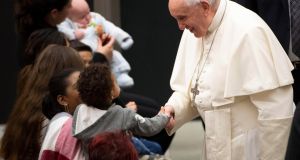 Pope Francis greets the faithful during his weekly general audience at the Vatican on Wednesday. Photograph: Maurizio Brambatti/EPA

The Association of Catholic Priests has said it is “disappointed” that Pope Francis has declined to approve the ordination of married men to address the priest shortage in the Amazon.

In an eagerly awaited document, Beloved Amazon, the pope did not refer to recommendations by Amazonian bishops to consider the ordination of married men and women deacons.

Instead, Francis urged bishops to pray for more priestly vocations and send missionaries to the region.

Fr John Collins, from the leadership team of the Association of Catholic Priests, said: “We had great hope that there would be a positive outcome in relation to a quite serious shortage. Clearly, that doesn’t seem to be happening now.

“I’m not quite sure why Pope Francis has done a U-turn on this really because we had been led to believe there was going to be a positive response.”

Fr Collins said it was “worrying” that an already stretched clergy pool in the Amazon is going to be “further stretched”.

“I mean, we have no idea what struggle is in this country compared to how people there are struggling, and it’s just sad. I feel a bit sad, actually.”

Pope Francis delivered his response in an apostolic exhortation, three months after the Latin American bishops’ proposal passed by 128 votes to 41 at a Vatican assembly of Roman Catholic bishops.

Apostolic exhortations are used to instruct and encourage the Catholic faithful but do not define Church doctrine.

Eamon Martin, Archbishop of Armagh and Catholic Primate of All Ireland, said he welcomed the document.

In a statement, Archbishop Martin did not refer to the Latin American bishops’ recommendation on reviewing priestly celibacy. Instead, he noted the pope “highlights the problems of poverty, economic and social injustice and the violation of human rights which are intertwined in the vicious cycle of ecological and human degradation”.

The 32-page apostolic exhortation did not even mention the bishops’ proposal, which was for older married deacons who are proven leaders of remote Catholic communities and have stable families to be ordained as priests.

Francis addressed the document to all peoples of the world “to help awaken their affection and concern for that land which is also ours and to invite them to value it and acknowledge it as a sacred mystery”.

He said he had four dreams for the Amazon: that the rights of the poor are respected, that their cultural riches are celebrated, that the Amazon’s natural beauty and life are preserved, and that its Christian communities show Amazonian features.

Pope Francis also calls for the full involvement of lay people, especially women, in the life of the Church

Francis had convened bishops from the Amazon’s nine countries for a three-week meeting in October to debate the ways the church can help preserve the delicate ecosystem from global warming and better minister to the region’s people, many of whom live in isolated communities or in poverty in cities.

In their final document at the end of the October synod, the majority of bishops called for the establishment of criteria so that “respected” married men in their communities who have already served as permanent deacons be ordained as priests.

In his statement, Archbishop Martin said the document reflects the “four key dimensions” which were discussed at the Synod of Bishops for the Pan-Amazon region last year – cultural, ecological, social and pastoral – and how they are “inextricably linked”.

“The document addresses once again those areas of urgent concern which Pope Francis reflected on in his encyclical Laudato Si’ five years ago. As then, the Holy Father today presents a clear-sighted analysis of the grave threats to the peoples and ecosystems of the Amazon, and by extension to the earth, our common home.”

Archbishop Martin added: “Pope Francis also calls for the full involvement of lay people, especially women, in the life of the Church, and he challenges the Church around the world to send missionaries to help sustain the spread of the Gospel in the Amazon and other remote areas.”

Child rapist with Covid-19 concerns refused bail 13:37
Separated, divorced fathers’ access to their children via video ‘not being facilitated’ 13:31
HSE unable to find nursing home willing to take vulnerable woman, court hears 13:18
‘We are with you, in thought and in spirit’ - President broadcasts message on Covid-19 13:13
Timmy Dooley faces uphill struggle as Seanad election count resumes 13:09