Irish cities ranked in terms of ‘friendliness’ to older people 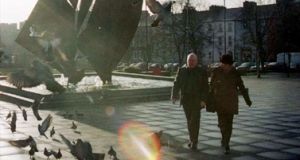 Galway came out on top for walkability and had the highest age-friendly urban index score. Photograph: Dara Mac Dónaill

The study, which surveyed more than 10,500 over 55-year-olds living in Dublin, Cork, Galway and Limerick, found that the age-friendliness of the urban environment was regularly associated with greater wellbeing.

“This was consistent with previous research that has reported that older adults that perceived their environments to be more age-friendly were almost four times as likely to report better quality of life than those perceiving lower age-friendliness levels,” it said.

The report, Age-friendly Environments and Psycho-social Wellbeing: A Study of Older Urban Residents in Ireland, was written by Sarah Gibney, Mengyang Zhang and Cathal Brennan of the Department of Health’s healthy and positive ageing initiative.

An age-friendly environment has features such as depressed curbs, level footpaths and green spaces, encouraging people to stay active and independent. Some cities, such as Nottingham, have introduced the initiative Take a Seat, which encourages shops and businesses to provide seats for older people. Other cities are providing more outdoor benches and better bus shelters to make life easier for older people and people with disabilities.

Of the four cities surveyed, it found that no city was ahead of the others in all dimensions compared with the other three cities, but Cork had the lowest score in several categories, including quality of life, safety and walkability.

Dublin scored highest on quality of life. Although the capital is often perceived as a dangerous place by those who do not live there, it actually received the highest score for safety. Galway came out on top for walkability and had the highest age-friendly urban index score.

The authors calculated the age-friendly urban index by taking factors into account such as access to services, pedestrian infrastructure and safety. They said older people living in cities with a higher score on the index were more likely to report higher quality of life overall, and a higher sense of pleasure and feeling of control over their lives. “These adults also had lower depressive mood scores and reported lower loneliness levels.”

“Proximity to amenities including pubs, supermarkets and parks strongly facilitates social interaction, whereas presence of graffiti, crime and lack of close-by resources all discourage people from getting involved with others,” the report stated.

Ireland is one of 41 countries involved with the World Health Organisation’s Global Network for Age-Friendly Cities and Communities, which promotes healthy active ageing and improve the quality of life for people over 60. However, Age Action Ireland said there was no cohesive planning for older people in evidence across government departments. Its spokeswoman, Celine Clarke, said everyone should have a choice to grow old in their own homes and communities with the support of adequate homecare and healthcare.

“For communities to be truly age-friendly, older residents have to be engaged in shaping the place where they live,” she said. “This involves local groups, councils, businesses and residents all working together to identify and make changes in both the physical and social environments, for example transport, outdoor spaces, volunteering and employment, leisure and community services.”

She said this approach would benefit everyone, not just older people.