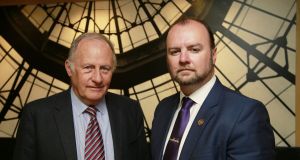 A “veil of secrecy” operated within legacy scouting organisations which in some cases allowed perpetrators to abuse children, the chair of Scouting Ireland’s board Adrian Tennant has told the Oireachtas committee on children.

Mr Tennant said there were cases in former scouting organisations where child protection concerns were not listened to.

“None of that is deniable by us at all, that is something that will be very forthcoming in the report that Ian Elliott is doing,” he said.

Representatives of the youth organisation appeared before the committee on Wednesday to discuss ongoing efforts to improve its governance and child protection standards following a major historic child sex abuse scandal linked to its predecessor organisations, the Catholic Boy Scouts of Ireland and the Scout Association of Ireland.

Mr Elliott, a child safeguarding expert, is currently drafting a final report after investigating the historic abuse scandal, to be completed in February 2020.

Dr John Lawlor, the organisation’s chief executive, said it had a number of adult members who were “suspended without prejudice” due to live child protection allegations and a “number that are subject to criminal investigations”. It is understood the number of members currently suspended following allegations is around four.

The Government is considering setting up a public inquiry into allegations that child abuse was covered up. “Our opinion is that would be a decision being made by the Government,” Mr Tennant said.

Dr Lawlor said the organisation has “no issue with scrutiny” and its safeguarding case files had long been available to An Garda Síochána and Tusla.

Mr Elliott worked as the organisation’s interim safeguarding manager for a period of months up until last March.

Committee chairman Alan Farrell said he was not questioning Mr Elliott’s professionalism but that “in my mind he was an employee so he is not an independent person”.

Labour TD Seán Sherlock also queried the independence of the process. “You can parse words about whether or not Ian Elliott is a consultant or not, but in my language he is paid by Scouting Ireland to conduct a review,” he said.

One member of the committee, Sinn Féin TD Kathleen Funchion, said she recently took the decision not to allow her own child join the scouts.

“I honestly just didn’t feel in any way confident in the organisation … Surely one way you could restore that is by dealing adequately with the historic cases and by being open to a genuine, independent public inquiry,” she said.

Mr Tennant said Mr Elliott would “leave no stone unturned” and his report was “very much independent” of the organisation, which again “apologised unreservedly” to past victims of childhood abuse.

Some 200 survivors had contacted a helpline set up by Scouting Ireland since the abuse revelations emerged last year in The Irish Times. To date, 321 alleged victims have been identified, 247 perpetrators, and a further 70 victims of alleged youth-on-youth abuse.

Mr Tennant said a recent RTÉ Investigates documentary featuring testimony from several survivors of abuse in the organisation was “grim and shocking”.

Dr Lawlor said the organisation was paying the “substantial costs” of counselling sessions for survivors, which was running to “many thousands of euros a year”. He said other costs had also increased, with up to €200,000 being spent on legal fees.

Scouting Ireland had opened 86 safeguarding case files so far this year, the committee heard, which ranged from minor to serious incidents.

Mr Sherlock said it was clear there had been past failures to report information to authorities and that it was “hard to be convinced that that robustness is there” in current practice.

Dr Lawlor said he believed professional safeguarding staff had “behaved in an exemplary fashion” and that Mr Elliott’s final report would bear this out.

“Before the late 1990s it is important to know these matters were handled by the legacy organisations, strictly by volunteers … that obviously wasn’t a satisfactory situation,” he added.