Most new citizens from Poland, followed by UK, Romania and India 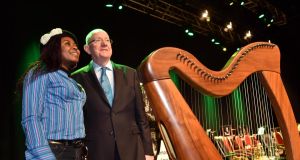 Mabel Chah from Cameroon with Minister for Justice Charlie Flanagan after she received her Irish citizenship at the Citizenship Ceremony in the INEC, Killarney. Photograph: Don MacMonagle

Two thousand people from 100 countries walked into the convention centre in Killarney on Monday, and 2,000 new Irish citizens walked out.

The largest grouping of new citizens attending the two separate ceremonies were from Poland, with the second largest from the UK, followed by Romania, India, Nigeria, Brazil and Latvia.

People from across the globe stood together and swore an oath of fidelity to the Irish nation, pledging loyalty to the State and respect for its democratic values.

Since such ceremonies were introduced in 2011 , some 127,000 people have received Irish citizenship, conferring upon them the same rights and obligations as every other citizen.

Minister for Justice Charlie Flanagan said Ireland was about building a shared unity “at the heart of the European family of nations”.

It was remarkable that a tiny island on the edge of the Atlantic now had citizens from every country in the world, he said. Asked on his way into the ceremony about an apparent rise of racism, Mr Flanagan distinguished between “casual racism” – which he said was not wilful and could be addressed by education and information – and what he said was recent “insidious anti-immigrant” sentiment.

“Small numbers of people” are attempting to exercise influence on communities, he said. This was why uplifting, welcoming ceremonies such as that in Killarney were so important.

Ireland’s commitment to diversity and tolerance was also emphasised by the presiding officer at the ceremonies, retired High Court Judge Bryan McMahon.

The State was a place of culture where traditions and history is ever-present and a place of diversity and openness to other cultures, Mr Justice McMahon said.

As on previous such ceremonies, he urged Ireland’s new citizens to tell their children about their old countries and not to forget them.

“This State does not require you to forget the country you come from or erase your personal histories,” he said to applause, urging them to look to see what gifts of music, sport, literature and art they could bring their new home.

There was applause for the staff of the Department of Justice who had, Mr Flanagan said, worked tirelessly since the overturning of a High Court impediment to citizenship to make sure the ceremony could take place before Christmas.

Lynne McEniff, originally from Hampshire in England, said she was delighted to be conferred with citizenship. Married to an Irishman, she has two children and has been living in Dublin for 20 years. She said both Brexit and the referendum on repealing the Eighth Amendment to allow access to abortion had contributed to her decision to seek Irish citizenship

“I have been thinking about it for a long time. It is really Brexit. I want to remain European,” said Ms McEniff, who was sporting the Tricolour pin given to each new citizen at the ceremonies. She also was passionate about women’s rights and she could not vote in the last referendum because she was not an Irish citizen.

Another English man who had been in Ireland for 47 years said he became an Irish citizen so he could “forget about Brexit” .

One of the youngest to attend the ceremony was also one of the loudest – three-month-old Róisín, the daughter of Marcin Kema and his wife Malwina, who both became citizens on Monday.

Róisín, who despite her parents’s best efforts managed to be heard loud and clear during the ceremony, was deliberately given an Irish name, her father said. Originally from Czestochowa in Poland, he works in the IT sector in Dublin. His wife is a financial consultant and arrived in Ireland 10 years ago.

He said Killarney was the first place in Ireland he lived when he arrived 14 years ago. This made the ceremony especially important to him.

“Today is a confirmation. This is home.”