‘Homes not hotels’: Thousands march in Dublin against homelessness

Families living in emergency accommodation among those at city centre rally

The capital is brought to a standstill by hundreds of demonstrators calling on the Government to take greater action on homelessness. Video: Kathleen Harris 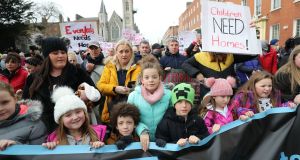 A protest in Dublin on Thursday against homelessness. Photograph: Nick Bradshaw/The Irish Times

Several thousand people, many of them families living in emergency accommodation, marched through Dublin city centre on Thursday in a protest organised by homeless people almost entirely through social media.

Although a number of TDs, including Ruth Coppinger of Solidarity, were present at the start, there was no overt trade union or political party presence as the protest set off from Parnell Square, shortly after noon.

Among the chants were : “Homes for people, not for profit”; “Leo in your ivory tower, this is called people power”; “What do we want? Public housing. When do we want it? Now” and, in reference to Minister for Housing Eoghan Murphy, “Murphy, Murphy, Murphy. Out, out, out”.

Almost all banners and placards were homemade and many were carried by children, with slogans such as “Homes not hotels”; “Why do the rich get two houses when we get none?”; “We are marching for the forgotten homeless”, and “End homelessness suicides”.

Martina Deegan, who has a son (9) with cerebral palsy, said she has been in emergency accommodation “being moved around hotels and B&Bs” for several years.

A mother pushing a buggy with a child said she and her four children had been homeless for two years, but have just been housed.

“We lived in one room for seven months. My kids were never off school before that. But we had no cooking facilities, nowhere to clean clothes. It was very hard and they were constantly sick and off school.

“My youngest got very withdrawn, very quiet, very unsure of himself, couldn’t understand why we couldn’t go back to our house. We have just got a house, but we can’t forget about all the others still in that situation,” she said.

Another woman said she was there because her sister was still living in the family home with two children – with the three of them sharing a small bedroom. “She can’t get anywhere to rent. Her mental health is deteriorating.”

The march appears to have emanated from a Facebook group, titled “Protest Against Homelessness in Ireland, Less Talk More Action”, founded two months ago. It now has 66,000 members across the State, and marchers on Thursday had come from Kilkenny, Westmeath, Longford, Limerick and Dundalk as well as Dublin.

The protesters stopped several times, at times blocking traffic. They halted outside the GPO, on O’Connell Bridge, and at College Green.

On Grafton Street they stopped outside luxury department shop Brown Thomas and chanted “Whose streets? Our streets”, and stopped outside the Disney Store chanting “Shame, shame, shame on you”. The Disney shop’s agents recently applied for planning permission for retractable gates to prevent homeless people sleeping rough in its doorway.

The marchers were joined by TDs Bríd Smith and Richard Boyd Barrett (People Before Profit) as they proceeded along St Stephen’s Green with the intention to march down Kildare Street for a rally outside Leinster House. The street was, however, barricaded by gardaí. They continued instead to Merrion Street and Government Buildings.

A list of demands, read out by a young boy, was given to TD Paul Murphy to read out in the Dáil, after the TD came out to meet the marchers, Among the demands are for the housing crisis to be declared a national emergency “and treated as such by the Government”, the “immediate resignation of Eoghan Murphy” and that a “rent cap be put in place” to protect people from evictions.

There were no speeches and the crowd dispersed at about 3pm.