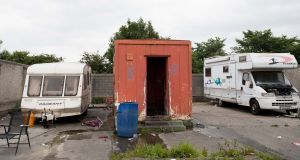 The provision of Traveller accommodation in Ireland remains inadequate with sites still badly located and in poor condition, a Council of Europe committee says in a report. Photograph: Tom Honan

The provision of Traveller accommodation in Ireland remains inadequate with sites still badly located and in poor condition, a Council of Europe committee says in a report published on Thursday.

The European Committee of Social Rights, which monitors compliance with the European Social Charter and makes legally binding rulings, also notes continued violations on trade union rights for members of An Garda Síochána in its report.

It says that none of the five issues on which the committee found against Ireland in December 2015 on Traveller accommodation have been fully addressed.

These were poor provision of Traveller accommodation; many sites being in “an inadequate condition”; Travellers facing eviction having “inadequate safeguards” under the Criminal Justice Act 1994; the Housing Act 1992 also providing deficient protections; and evictions being carried out without enough care as to Travellers’ welfare.

A family, including two children with serious medical needs, were living without running water or electricity in Donegal

The report says that while there has been “progress in the provision of accommodation for Travellers . . . there is still a substantial deficiency” as “a number of sites are in poor condition, lack maintenance and are badly located”.

“The legislation permitting evictions fails to provide for consultation with those to be affected, reasonable notice of and information on the eviction,” the report says. “Nor does all the legislation require the provisions of alternative or adequate legal remedies . . . There is no legal aid for those threatened with eviction.”

It cites two cases – in Donegal and Clare – where Traveller families’ inadequate housing situations had come before the High Court. A family, including two children with serious medical needs, were living without running water or electricity in Donegal.

In September 2017, Donegal County Council agreed to an order to quash its earlier decision to defer housing support to the family and to agree to reconsider their social housing application.

Clare County Council was ordered in the same month to assess the needs of a family, including nine children, who had been “living in unhealthy accommodation circumstances for three years including rat and insect infestation, and sewage seepage into their home”.

Neither case has been fully resolved.

The report refers to the October 2015 fire at a temporary halting site in Carrickmines, Dublin, in which 10 people including five children died. An inquest this week returned verdicts of misadventure for all 10 deaths.

The report quotes the Irish Human Rights and Equality Commission, saying: “this tragic event is a shocking illustration of the discriminatory barriers that members of the Traveller community experience in accessing appropriate accommodation”.

With regard to the Garda, the report says there has been a lack of progress since December 2013 in addressing the “complete abolition of the right to strike” for gardaí.

This is despite a commitment from the Government to provide the force with permanent access to the Workplace Relations Commission and the Labour Court.

The committee finds Ireland is now in full compliance with the charter on the prohibition of all violence against children, following the 2015 outlawing of all corporal punishment of children in any setting.

It had ruled against Ireland on the issue in December 2014.