No Child 2020: The project and its five policies 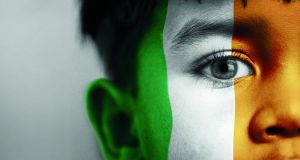 Pessimism is often used as an excuse – the belief that nothing can be done relieves the burden of having to do anything. Photograph: Mariano Sayno via Getty Images

No Child 2020 is a new initiative by The Irish Times, providing a sustained focus on child welfare and children’s issues over the coming year. Inspired by the Democratic Programme issued by the first Dáil a century ago, we explore the problems facing children in Ireland today and offer solutions that would make this a better country to be a child. For updates on a related campaign from the Children’s Rights Alliance, see here

“It shall be the first duty of the Government of the Republic to make provision for the physical, mental and spiritual well-being of the children, to secure that no child shall suffer hunger or cold from lack of food, clothing, or shelter, but that all shall be provided with the means and facilities requisite for their proper education and training as Citizens of a Free and Gaelic Ireland.”

On January 21st, 1919, the first democratically elected Irish parliament declared a republic and then defined what it meant. The Democratic Programme adopted that day contained a radical idea: the new republic would be judged by its ability to do right by its children.

The pledge boils down to five basic rights that no child should go without. They are:

Food – no child should be hungry

Shelter – no child should be homeless

Health – no child should be without timely, affordable healthcare

Education – no child should be blocked from having an education

Participation – no child should be excluded from society

On the centenary of that first meeting of Dáil Éireann, No Child 2020 – a title that echoes the text of the Democratic Programme – aims to provide a sustained journalistic focus on child poverty in all its dimensions, and to help create a sense of possibility around its eradication.

A hundred years on, the first Dáil’s “no child” pledge remains unfulfilled. About one tenth – 105,000 – of Ireland’s children grows up in consistent poverty. That means they live in a household with a very low income and go without basics such as heat or nutritious food.

These children suffer through no fault of their own. As the charity Barnardos has put it, “no child’s access to food, warmth, healthcare or education should be determined by how much money their parents have or where they live”.

Child poverty deprives thousands of young people of the opportunity to grow up healthy, to flourish, to reach their potential. It also perpetuates class and social divisions, and stores up problems for the future.

None of this is inevitable. Across the world, there are examples of smart policies that have helped reduce the numbers of children who go without basic necessities. Here in Ireland, income supports already reduce the at-risk-of-poverty rate by 60 per cent.

We know that consistent, well-managed and well-resourced services, especially if they are delivered from the beginning of a child’s life, can transform the lives of children, families and communities.

As part of this series, The Irish Times and the Children’s Rights Alliance have collaborated in drawing up five policy proposals under each of the five themes identified in the Democratic Programme of the first Dáil.

These ideas are intended as a contribution to the debate, showing what is possible and how. But they are not the final word. Nor are they enough in themselves to fix the problem. Rather, they are a starting point.

Over the course of the series, The Irish Times will publish alternative ideas and provide a platform for all contributions on the topic. Today, the Children’s Rights Alliance, a coalition of more than 100 organisations across the State, is launching a campaign on the same theme. Further information can be found here.

Government has a key role in reducing child poverty, but its eradication will require a broad effort involving all of society. Parents and schools have a role. As do community organisations. Employers also have a big part to play – for example, through the quality of the jobs they provide or the workplace flexibility they offer.

The pledges contained in the Democratic Programme are not utopian aspirations but cornerstones of a dignified human existence. There could be no better way to mark the centenary of the first Dáil than to make them a reality.

Many families on low incomes cannot afford to follow a healthy diet, and families with infants and teenagers face higher food costs. A two-parent family with two children of primary and secondary-school age have to spend an average of €145 on food every week to ensure they have a nutritional healthy diet.

One in four children are overweight or obese; many are also malnourished at the same time. Inadequate nutrition in children is linked to reduced cognitive function, delayed school enrolment, impaired concentration, increased illness, absenteeism and early school dropout.

Every child will have a hot, nutritious meal every day.

Enable schools and non-formal educational settings to provide a hot, nutritious meal to every child by establishing a small grants scheme to put in place kitchens or cooking facilities. To reach more children in need, early years and youth work settings should have access to funding under the existing School Meals Programme.

Differences in the health of children growing up in poverty are obvious from three years of age. Thousands of children face long waiting lists to access public healthcare, while others can get a faster service through private care. Children in low-income families are more likely to have a chronic illness, worse respiratory health and higher levels of obesity.

Every child will have access to basic healthcare when they need it.

The Constitution requires the State to provide for free primary education. In reality, going to school costs a lot of money. Barnardos’ 2018 School Costs Survey found parents spent €360 for a senior-infant pupil and €380 for a fourth-class pupil to cover the basics required such as books, workbooks, uniforms and “voluntary contributions”.

More than a third of parents get into debt to pay for schools costs, according to the Irish League of Credit Unions. Others said that they would be unable to buy their children certain school items, including new school shoes, or pay for extracurricular activities, while one in five parents said they would have to cut spending on household bills.

It would cost €103.2 million annually to vindicate the constitutional right of all children to free primary education. Invest the first €20 million to introduce free schoolbooks for every child in primary school.

A 2016 report published by the Arts Council and the Economic and Social Research Institute found that children and young people from disadvantaged backgrounds are less likely to participate in arts and cultural activities than children from more affluent families. Cost is a key barrier to the participation of children and young people in local community and recreational activities. Taking part in cultural activities such as singing, painting, dance, and theatre benefits children academically and in developing better social skills and positive relationships.

Every child will have the opportunity to take part in community-based arts and cultural activities.

Invest to ensure every child can access at least one community arts or cultural opportunity each year by providing a subsidy to families with children. This could be done by issuing a “culture card” to all under-18s, or their parents, to access an arts or cultural experience in venues across the State.

Home should be a warm, secure and safe place for all children. However, we are in the midst of a housing crisis with unprecedented levels of children experiencing homelessness. The absence of adequate social housing and the reliance on an overstretched private rented sector has resulted in almost 4,000 children living in inappropriate emergency accommodation, including B&Bs and hotels. Many others are staying in overcrowded situations with family and friends to avoid this, but are not counted as homeless.

Children living in emergency accommodation suffer high levels of anxiety and become withdrawn. Having nowhere to study or do their homework, they often fall behind at school. They also suffer from ill-health, exhaustion and hunger. While there is a policy to move families into family hubs which are more suitable, they are only another form of emergency accommodation, and time spent in the hubs should be limited while longer-term solutions should be prioritised.

Every child will live in secure and affordable housing.

Legislate to ensure the best interests of the child informs any decision about where to accommodate them and their family. The legislation should clearly time-limit the use of emergency accommodation for families with children.

Read the No Child series in full, on irishtimes.com/nochild2020