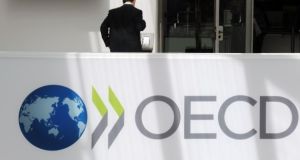 Ireland has seen one of the sharpest falls in spending on income supports, including unemployment payments and family cash benefits, among OECD countries since the economic recovery began, a new report says.

The Organisation for Economic Cooperation and Development published figures on Wednesday which show public social spending-to-GDP ratios are now highest in France at just over 30 per cent of GDP.

But such social spending in Chile, Ireland, Korea, Mexico and Turkey accounts for less than 15 per cent of GDP, the report said.

“Since 2009, public social expenditure to GDP ratios fell in almost two-thirds of OECD countries, and the decline was most pronounced in Ireland, and in Hungary,” the report added.

It said that in both countries, the fall was related to “declining spending on income support to the working age population and GDP growth”.

“In contrast, in Finland, Norway and Korea, spending-to-GDP ratios increased by 2 percentage points over the same period.”

Ireland was the sixth lowest of 36 OECD countries in terms of its overall public social expenditure by broad social policy area, spending 4.6 per cent of GDP on income supports to the working age population and 5.3 per cent on health in 2015-2017.

The report noted that in a small number of OECD countries, including Canada, Israel, New Zealand, the Slovak Republic, Slovenia and Sweden, the public social spending-to-GDP ratio is the same now as it was in 1990, “or even lower”.

The economic recovery has translated into a decline in spending on unemployment compensation from 1 per cent of GDP on average in 2010 to 0.7 per cent of GDP in 2015, and the fall in spending in that area was most pronounced in Belgium, Germany, Iceland, Ireland, Spain and the United States.

“Over the same period, public spending on family cash benefits fell from 1.4 per cent to 1.2 per cent of GDP across the OECD on average, with the largest reductions recorded for the Czech Republic, Hungary, Iceland, Ireland and Luxembourg,” the report added.

The OECD said the decline in public spending on unemployment compensation and family cash benefits drove the decrease in spending on the working age population over 2010 and 2015.

The real GDP growth rate for Ireland jumped up in 2015 to just over 25 per cent. The OECD said this was related to a small number of multinationals relocating their intellectual property assets here.