Woman refused abortion says she was told of fatal abnormality

Solidarity TD Ruth Coppinger and People Before Profit TD Bríd Smith have claimed in the Dáil that a pregnant woman who has discovered that her foetus has a fatal abnormality has been denied an abortion. Video: Oireachtas TV 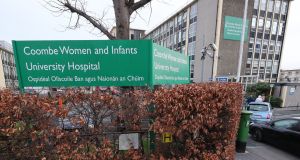 Coombe wrote to woman: “As you are aware, your foetus has been diagnosed with a complex foetal anomaly.” Photograph: Niall Carson/PA Wire

The woman who was refused a termination after a complex anomaly was diagnosed was informed in writing medics were “not of the reasonable opinion” the foetus would die before or within 28 days of birth.

The Dublin woman, who intends to travel to England for an abortion, is adamant she and her partner were told verbally during a scan on January 10th by two obstetricians at the Coombe hospital her foetus had a fatal abnormality.

This week in a letter to the woman, in which the word “fatal” is not mentioned, the hospital states: “As you are aware, your foetus has been diagnosed with a complex foetal anomaly ...

“Following your attendance at the hospital, and specifically your examination on January 10th, 2019 … despite the complex foetal anomaly, we are not of the reasonable opinion formed in good faith that there is present a condition affecting the foetus that is likely to lead to the death of the foetus either before or within 28 days of, birth, as per the Health (Regulation of Termination of Pregnancy) Act 2018, Section 11 (condition likely to lead to death of foetus).

“We wish to confirm that in accordance with the draft guidelines, a multidisciplinary meeting was convened on January 16th to consider the full information available in relation to the condition affecting the foetus, including all scans, and the conclusion was consistent with the opinion we had formed that the criteria to certify a termination of pregnancy at this point were not fulfilled.”

The recommendation of the multidisciplinary team was that there would be a full re-evaluation of the clinical condition affecting the foetus in four weeks’ time, the letter said, adding that the couple were told they could apply for a review to the HSE.

The letter was dated January 17th, the day the case was raised in the Dáil by Solidarity TD Ruth Coppinger and People Before Profit deputy Bríd Smith. Ms Coppinger suggested the hospital board had over-ruled two consultants – a claim later denied by the hospital.

The letter concludes with an acknowledgement that the woman is in a difficult situation and offers assurances of continued support and care. It said all options available to the woman would be discussed, “including the option to travel overseas”.

The woman and her partner dispute the hospital’s account, however.

“In the interests of clarity, regarding section 11 of the Health (Regulation of Termination of Pregnancy) Act 2018, the Coombe Women and Infants University Hospital is providing abortion services, in accordance with the criteria set out in the legislation,” the hospital said in a statement.

“In relation to the implementation of a full abortion service, the hospital is finalising its preparations to introduce this service in the very near future.”

A diagnostic report on the woman’s January 10th scan says of the foetus: “There is a large exomphalos, the heart is low and anterior in the thorax. The bladder is not visible in the pelvis, the limbs are abnormally positioned”.

The report says the findings are consistent with OEIS, a complex combination of defects. “The findings have been explained to the couple and they are requesting termination of pregnancy. Explained need for MDT [multi-disciplinary team] discussion for consensus.”

Guidelines from the Institute of Obstetricians and Gynaecologists released on Friday state that for some women termination of pregnancy in Ireland “may still not be an option”.

“This may be for complex reasons including legislative restrictions in Ireland for non-fatal but major foetal anomalies, the need to travel to another country for treatment, financial or social considerations, as well as to access specific medical procedures.”